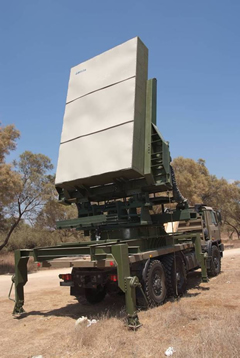 Rafael Advanced Defense Systems and the Israel Ministry of Defenseconcluded another series of intercept tests conducted with the Iron Dome counter-rocket defense system, the recent tests employed all the system’s elements, including the Multi-Mode Radar (MMR) system, developed by IAI Elta Systems (shown on the photo at right), Tamir missile interceptors with live warheads, and battle management system, developed by MPrest Systems. Rafael is planning to resume the system’s testing in the upcoming months, to demonstrate the Iron Dome operation as a system Iron Dome is expected to reach initial operational capability by early 2010.

The tests validated the missile’s performance and demonstrated its effectiveness in intercepting rocket targets such as the Grad rocket in use by the Hezbollahand Hammas terrorist organizations. Iron Dome is designed to provide effective defense against short-range rockets, fired from distances of four to 70 kilometers. The Extended range Grad rockets fired by the Hammas during the recent conflict in January 2009 have reached targets 42 kilometers.