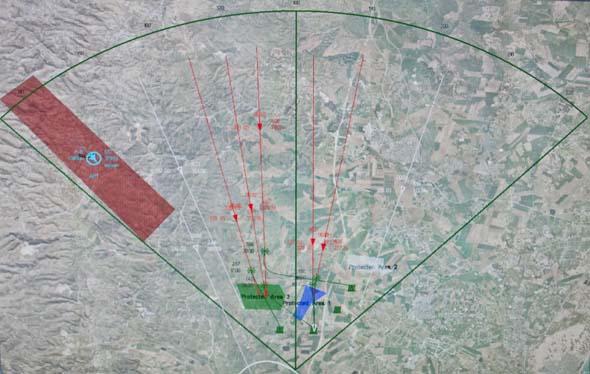 The battle management system constantly plots the ballistic trajectories of each threat, assessing if it is presenting a threat to the protected areas. Such threats are marked red, and trigger the computation intercept solutions. Within a few seconds, over 800 different intercept solutions are performed per each target, evaluating the best possible match of target, interceptor, launcher and launch unit to ensure all targets are engaged and destroyed outside the protected areas, while the system complies with other restrictions, such as no-fire zones, minimized collateral damage and eliminating potential threat to friendly air assets operating in the area.

In a split second the system suggests the preferred solution and requests the operator’s permission to launch the missiles. Firing commences immediately upon the operator approval. However, if human intervention is required for, the user can select another firing plan from the suggested options or manually override the system to instruct using a specific asset.

As the Tamir interceptor is launched it sets course to bring itself to the planned intercept point. As its sensor acquires the target, Tamir maneuvers to the final engagement, bringing the target into the kill-zone and activating its warhead at close proximity to the target. Recent tests have demonstrated the missile has exceeded the level of performance originally planned for the system. Operators can monitor and assess the situation over the digital map, depicting the situational picture, depicting the incoming threats, each plotted with firing sources, actual location, projected impact point and recommended intercept, all firing units are also displayed, as well as protected areas, safe impact areas and protected airspace, where extra caution should be maintained for flight safety. Information can also displayed in different schemes, such as a histogram, prioritizing all targets engaged at a given time.