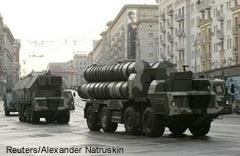 The latest version of the high performance, strategic air defense system developed by the Almaz Science and Production Association is the S-300PMU3 / S-400 Triumf (SA-21). The missile was first introduced in 1999 and features a new, much larger missile developed by the Fakel Machine Building Design Bureau, deployed in pairs (two per TEL), rather then stacks of four as in previous S-300 systems. Unlike its predecessor (the S-300), the Triumf is equipped with a homing warheads and therefore, can be employed beyond the range of its guidance radar (up to 400 km).

The system is believed to have an engagement range of 400 km (250 mi) and the capability to detect stealth. The Triumf missile is capable of intercepting medium range (3,500km) ballistic missiles.

According to First Deputy Prime Minister Sergei Ivanov, who oversees the defense related sectors, Russia is seeking to develop a follow-on system to the S400, combining elements of air-, missile-, and space defenses. Ivanov mentioned that the Russian military has inducted the new S-400 missile systems in late 2006. The status of the system remains unclear. In the past, first deployment was announced in late 2006, and initial operational capability was expected within 2007. Yet, the system’s development was considerably delaied and was expected to complete development later in 2007. Triumf systems will be fielded in two phases. the baseline system will be fielded firs, and the full capability version (advanced Triumf) will be fielded beginning 2010. The Russian air defense forces commander Lieutenant-General Alexander Gorkov, was quoted by the kommersant saying the (advanced) system will be operational defending strategic locations in Russia by 2015.