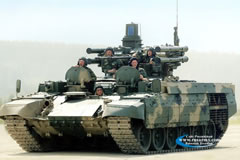 In 2009 the Russian Army is scheduled to receive a new main battle tank, claimed to be superior to existing designs. The new tank will introduce a new hull, power plant and drive train. It will also have improved firepower, comprising of new armament, target acquisition, fire control and surveillance systems. The Russian Army is also planning to field the long awaited Tank Support Vehicle, scheduled to enter production at Uralvagonzavod next year. The first armor units are expecting the new BMPTs by 2010.

In 2009 the Russian Army can expect to receive the first examples of a new, locally designed main battle tank, claimed to be superior to all existing designs. According to General Nikolai Makarov, director of procurement department and Deputy Defense Minister Army, the new tank (assumed to be designated T-95) has a new hull, power plant and drive train, and firepower, comprising new armament believed to consist of an unmanned turret carrying the gun, an automatic ammunition loader, and elevated pedestal comprising target acquisition multi-sensor day/night systems. The tank is equipped with advanced, fire control system. The tank is under development at Ural based Uralvagonzavod plant. Apart from the Russian Army, Saudi Arabia was reported to be interested in the new tank, according to a Sept, 2007 French News Agency report. However, since actual testing in Saudi Arabia were conducted with T-90s, it is assumed that the saudis are evaluating the T-90 rather than the radically new T-95.

According to Jane’s, the T-95 (currently known as “Object 775”) will have a weight of about 50 tons, with length and width similar to the existing T-72, T-80 and T-90 MBTs. Jane’s believs this model will be equipped with a smoothbore 135 or 152mm cannon. The three crewmembers are seated in a hull mounted capsule seperated from the ammunition by an armored bulkhead.

Another main battle tank under development in Russia, the “object 640” (also known as ‘Black Eagle’), is also under development at the Omsk-based Design Bureau of Transport Machine-building. Unveiled at an arms exposition in Omsk, Siberia, in 1999 Black eagle has not been seen since. This Black eagle also features a new chassis and turret but uses a manned turret with an automatic loader.

According to Makarov the new tank is expected to complete the current test series in 2008 and enter production in 2009. Makarov claimed the new tank will be competitive and superior to current main battle tanks. He admitted that while the local industry can deliver highly sophisticated weapon systems, there is still a shortage of high quality military components for such systems that resulted from years of neglect of military industrial infrastructure since the collapse of the Soviet military industry enterprises.

The unmanned turret design is already incorporated in another vehicle designed at Uralvagonzavod, known as ‘Tank Support Vehicle’ or BMPT. By 2010 the first Russian armor units are scheduled to be equipped with this vehicle, dubbed ‘Terminator’ – Russia’s Ground Forces Commander, Colonel General Alexei Maslov, told news media that the first tank company will be equipped with BMPT by 2010.

The ‘Terminator’ will enter production in 2008. Uralvagonzavod developed the vehicle based on combat lessons learned during the war in Chechnya, but its implementation has been subject to delays. According to Novosti news agency, Uralvagonzavod Director General Nikolai Malykh, confirmed that his company received the first orders for the new vehicle, the first two BMPTs will be produced in 2008.

The BMPT uses the T-72 tank chassis. It is equipped with enhanced armor and improved armament for the engagement of airborne and surface targets, including light and medium armored vehicles. Its main armament consists of two 30-mm 2A42 automatic cannons, a coaxially-mounted 7.62-mm PKTM machine gun, and four launchers with laser-guided Attack-T anti-tank missiles. According to the Vzglyad business newspaper quoted by Novosti, “Several foreign countries have already expressed an interest in buying the Russian-made BMPTs”.