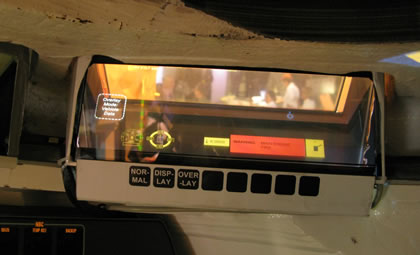 AUSA, Washington DC, October 2009: The exhibition provided a preview of potential improvements for major platforms, such as the Stryker, Bradley Infantry Fighting Vehicle, Paladin self propelled gun, M-1A2 SEP / E3 Abrams main battle tank and M-1117 Armored Security Vehicle (ASV). It was an opportunity for several companies to present a conceptual approach to manned-unmanned operation of ground vehicles, such as in convoy operations.

The Army’s next generation Ground Combat Vehicle (GCV) was the hottest item on the premises, but neither the Army, nor industry has even a clue about how these vehicles will look like or if they will be tracked, wheeled or both. The Army wants its next generation combat vehicle to improve force protection, with the first increment of vehicles fielded by 2017 to providing all occupants explosive blast protection equivalent to Mine Resistant Ambush Protected (MRAP), as well as the ability to observe 360 degrees from inside the vehicle. All increments are expected to integrate advanced passive and active protection, as technology matures and lighter materials are available to provide comparable protection. The vehicle will provide full tactical mobility in rough terrain and confined urban landscapes. The first increment will be the Infantry Fighting Vehicle (IFV), to be designed to maintain the maneuverability of the Bradley, while surpassing the protection level provided by the current tracked vehicle.

An option for such IFV could be the enhanced version of the Stryker infantry combat wheeled vehicle, which made its debut here as the ‘Wheeled Combat Vehicle Demonstrator’. The vehicle presents the achievements of a collaborative effort undertaken by a team of companies led by GDLS, that developed a combat vehicle,  integrating a range of mature, readily available technologies that can be rapidly fielded with Stryker Brigades during reset, or through new production for future brigades. Among these new enhancements are increased firepower, provided by a new remotely controlled 25/30mm armored, Medium Caliber Remote Weapon Station (MC RWS) and a Mast Sensor System, developed by Lockheed Martin and Raytheon as a derivative from the Future Combat Systems program. Other enhancements include a full digital vehicle networking backbone, power management, improved armor and blast protection. GDLS also introduced the Infantry Squad Module Demonstrator – a developmental tool developed by GDLS to evaluate the survivability, situational awareness, power management and squad ergonomics assessing mission effectiveness of vehicle mounted infantry squad equipped with integrated soldier systems and equipment expected to be fielded by 2015. The module design is based on lessons learned from recent conflicts and the FCS program, and implements improved blast protection, power availability and battery charging requirements, situational awareness and connectivity to stowage access and placement, enabling rapid egress and ingress.

Force Protection has also unveiled new enhancements for the MRAP, among them the vehicle tactical functions management system known as the HUB. Installed as an add-on to standard MRAPs, integrating multiple electronic systems on the vehicle, the HUB connects surveillance and reconnaissance payloads, remotely operated weapons system, mission computers, radios, blue force tracking devices, GPS, acoustic fire detection systems, IED jammers, multiple radios and intercom – all are connected through the ‘vehicle network’ to enable the driver and commander to operate the systems in an efficient way from the cabin crew stations.

A different approach was demonstrated by Textron Systems, which took the AUSA opportunity to introduce a new and upgraded version of the M1117 family – designated ‘Mobile Survivable Vehicle‘. Targeting the upcoming Canadian acquisition of hundreds of new armored vehicles, Textron engineers have adapted their vehicle to the Canadian requirements, increasing the vehicle’s gross weight by 18%, to 38,000 lb, spent mainly on additional armor protection and increased payload capacity (220% increase).

All three Joint Light Tactical Vehicles (JLTV) Technology Demonstrators (TD)were on display at the exhibition. Last year the JLTV program office has awarded three technology demonstration contracts to three teams, to produce three basic configurations of the vehicle – with payload capacity of 3,500 lb seating four soldiers in the front and back seats (A category), B category carrying 4,000-5,000 lb payloads and seating six soldiers, and a utility prime mover and ambulance seating a crew of two and carrying up to 5,100 lb of payload. A common trailers is also part of each vehicle family. At the exhibition, the BAE Systems-Navistar and Global Tactical Vehicles (GTV) teams displayed Category B vehicles, while Lockheed Martin displayed an ambulance version of its Category C variant. Once the vehicle enters production, JLTV is expected to become one of the largest military vehicle acquisition programs worldwide. Hence, the Army and Marine Corps managing the program are inviting international participation in the program, where foreign countries could ‘buy-in’ their place in the project, similar to the JSF fighter program.  Interested nations must be fully on-board prior to the beginning of the request for proposal process expected after the current technology evaluation phase.

An M-1A2 SEP turret demonstrator on display at AUSA outlined a range of optional new systems integrated into the latest SEP-2 model. Among these were a thermal blanket from Saab, the CROWS II remotely controlled weapon station from Kongsberg, a new display for the loader, and a new head-up display applied on the standard vision block, designed by Oasis systems. Images and computer symbology projected over the vision block providing a ‘head up display’ effect, improving situational awareness for the tank commander.

The Army’s newest acquisition – M-ATV currently underway to Afghanistan, was represented at prime contractor’s Oshkosh booth. An M-ATV based technology demonstrator developed by Oshkosh hints about the future applications of tactical vehicles, based on autonomy, power and all-terrain mobility. The new technology demonstrator is implementing the TerraMax system, integrating sensors, artificial intelligence and drive-by-wire technology to function in autonomous, leader-follower or manually driven modes.

A different application of ProPulse employed on theA3 version of the Heavy Expanded Mobility Tactical Truck (HEMTT A3) converts the vehicle into a power station, and load carrier configured to carry the modular Payload Loading System (PLS). This innovative application that made its debut here introduced a rapid deploying power station, utilizing renewable energy by a windmill and solar panels, utilizing the vehicle’s ProPulse system as a backup generator. The system is designed to produce 25 kVA of continuous AC power on demand.

Lockheed Martin is also developing technology to support a mixed manned-unmanned convoy, through the Convoy Active Safety Technology (CAST) – a modification kit that turns a conventional truck into an autonomous member of a convoy with a push of a button. Utilizing the company’s developed AutoMate sensor and actuator kit, CAST enables the unmanned vehicles in the convoy to control the vehicle’s lateral and longitudinal position along the road and relative to the leading vehicle, avoiding obstacles, and maintaining constant interval between vehicles to improve the safety and security of the convoy, and reducing crew fatigue and exposure to hostile attack. The system has already been integrated in Family of Medium Tactical Vehicles (FMTV) and M915 vehicles, demonstrating five vehicle convoy operations. The system is designed to support movement at speeds of 50 mph on paved roads and 35 mph on dirt roads, operating in day and night, under limited visibility conditions.