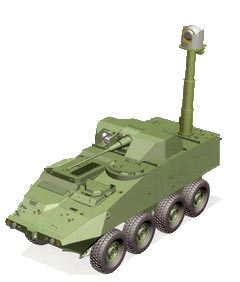 AUSA, Washington DC, October 2009:  A new version of the Stryker at AUSA 2009 in Washington DC, configured as a ‘Wheeled Combat Vehicle Demonstrator’ was also on display. The vehicle presents the achievements of a collaborative effort undertaken by a team of industries led by General Dynamics Land Systems (GDLS). The team configured the advanced combat vehicle by integrating a range of readily available and mature systems, that can be fielded in the immediate or near future (TRL level 6-7) on current Stryker Brigades, during reset or retrofit or through new production for future brigades. Increased firepower is available with the new remotely controlled 25/30mm armored medium caliber Remote Weapon Station (MC RWS). The vehicle also introduced the new Mast Sensor System, developed by Lockheed Martin and Raytheon. The MC RWS and MMS can be employed together to form a ‘hunter-killer’ assembly.

Other enhancements include a digital backbone, power management, improved armor, blast mitigating seats. The MC-RWS turret has its on-board optics capable of identifying and engaging targets at ranges up to 4,000 meters. Coaxial 7.62 mm machinegun provides added firepower and flexibility. The gun is loaded with 160 ready rounds. Unlike an overhead station that does not penetrate the armor deck, MC RWS do require minimal turret deck penetration. The advantage of this configuration is the ability to reload the gun under armor and firing the gun at high elevations of up to 70 degrees. The system has no turret basket, enabling the protected transport of a full squad.

GDLS plans to expand the Piranha based Stryker’s platform with a 450 hp C9 engine, coupled to a ZF 7HP902 transmission (7 forward 1 reverse speeds) through a single-speed transfer case, designed to provide enough torque to match the vehicle’s maximum gross weight of 55,000 lbs. This beefed-up Stryker can travel at 100 km/h (62 mph) on road, cross a two-meter wide trench and climb a 60% grade. The vehicle has an independent, gas spring hydraulic dampening suspension for each of the eight wheels, operated with computerized damping control and selectable height adjustment via height management system. Capable of adding significant weight, the updated Stryker could be fitted with modular add-on armor kits including appliqué armor against kinetic and fragmentation threats, IED, VB-IED and RPG protection, utilizing LERA hybrid-reactive modules. The vehicle’s counter-mine protection has been improved by selective strengthening of the hull, and implementing computer-controlled variable height, maintaining maximum vehicle ground clearance and height, under all terrain and road conditions. Further blast protection is gained by composite floor plates absorbing fragmentation and blast protected seats allocated to all crew members and troops.

The vehicle is equipped with a 570 amp alternator charging four HASF-FT batteries supporting the vehicle’s on-board electronics. On board systems can also talk to each other over the CAN-Bus digital network. Cameras located in key positions around the vehicle and at the rear, enabling the crew to develop situational awareness over 360º, keeping warfighters fully aware of activity in close proximity of the vehicle. Digital displays are available to all crew members, providing access to vehicle systems’ status which are automatically monitored by embedded diagnostics. Images from external sensors can also be displayed. Communications include JTRS, WIN-T and the new FBCB Joint Platform Tablet computer, extending FBCB2 situational awareness to dismounted use. 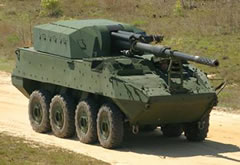 GDLS Artillery team has also been working on a self propelled howitzer, as part of an industry team developing artillery fire support systems utilizing the C-130 transportable Stryker platform and the South African Denel 105mm Self-propelled howitzer gun design. The main armament is a 52 Caliber 105mm gun, with effective range of 30 km with unassisted ammunition, and over 40 km with rocket assisted projectiles. The turret is fitted with an assisted rammer. The vehicle has ammunition stowage of 56 rounds. While offering equal effectiveness, the 105 ammunition weighs about half the weight of comparable 155mm projectiles. The 105 mm Mobile Gun System (MGS), the SpH can also fire armor-piercing discarding sabot (APFSDS) rounds in direct fire, at targets range of 0-3,000 meters. The Stryker SpH has a combat weight of about 45,000 lbs. 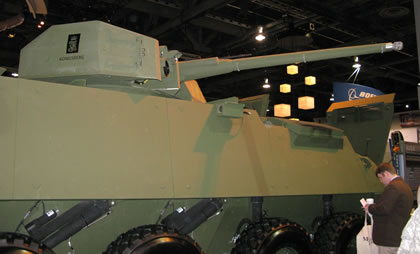