AUSA, Washington DC, October 2009: Improving early warning and protection of forward operating bases is urgently needed by many armies. The advanced lightweight counter-mortar radar providing early warning on incoming mortar attacks, and new, very-short-range interceptors, designed to defeat such threats before they hit their targets.. Other missile defense systems being fielded under the U.S. Army control include enhanced PAC-3 combined air and missile interceptor, and THAAD missile defense system are being developed under the U.S. Missile Defense Initiative, to protect forward deployed forces from short and medium missile attacks.

Early warning enables soldiers to take cover while the system plots the firing mortar location, enabling the FOB or other forces in the area to take action. These radars can also provide early warning for Counter Radar, Artillery and Mortar (C-RAM) weapons such as the Extended Area Protection and Survivability (EAPS) missiles currently under development by teams headed by Lockheed Martin and Northrop Grumman. Two concepts are developed – the LM team is pursuing a terminally guided Hit-to-Kill (HTK) mini-missile kinetic interceptor, while NGC is developing a seeker less, passive interceptor, utilizing proximity-fused forward-firing warhead to achieve a similar effect. Both missiles are designed to intercept subsonic targets such as mortar rounds, at ranges as short as 3,000 m’. Both systems will rely on the XM-501 NLOS-LS for operations and logistics, with each CLU carrying up to 132 interceptors, or configured with mixed loads of Precision Attack Missiles (PAM) and EAPS C-RAM interceptors. The systems, expected to be ready for testing by mid 2011. It will be supported by a dedicated 360 degree staring AESA radar, providing battle management ad guidance, as well as the new EPQ-36 enhanced counter artillery and mortar radar, currently being developed.

Another C-RAM system is the Iron Dome, developed by Israel’s Rafael. Raytheon is already cooperating with Rafael on the development of the Stunner medium-range rocket and missile interceptor, being developed with support of the US missile Defense Agency; sofar the Iron Dome program was funded exclusively by Israel but after proving high level of maturity, U.S.-Israeli production of the systems could be considered, as such a capability is meeting urgent requirements both in Israel and in other theaters. 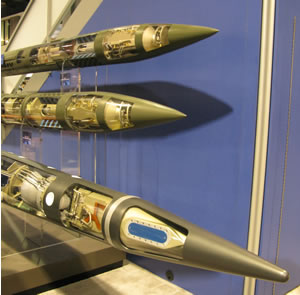 Extending air- and missile-defense even further, Lockheed Martin is introducing an enhanced performance Patriot PAC-3 missile, designed to encounter evolving threats at ranges and altitude about 20 percent beyond the current missile’s capability – the new interceptor will use a larger, dual pulse rocket motor and larger, collapsible fins, allowing the missile to fit into the current PAC-3 launcher, giving the interceptor more maneuverability against faster and more sophisticated ballistic and cruise missiles. The warhead and guidance systems will remain the same. Maintaining its strategic mobility and existing infrastructure, this PAC-3 Missile Segment Enhancement (MSE) could integrate with naval based SM-3 and TPY-2 radars to provide a forward deployed element of the missile defense capability being proposed by the White House and Pentagon. PAC-3 MSE has already been selected as the primary interceptor for NATO’s Medium Extended Air Defense System (MEADS) and is planned to provide the lower tier element in President Obama’s new missile defense program.