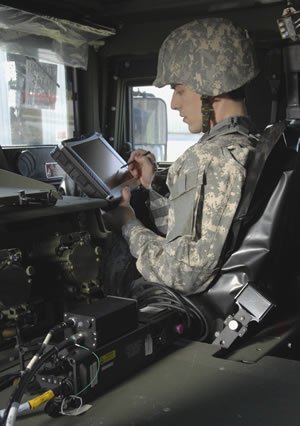 AUSA, Washington DC, October 2009: Persistent surveillance is another field of improvement for the U.S. Army. Current assets, including aerial and vehicle mounted stabilized EO systems, are providing good performance. However their availability, mobility and mission endurance is measured in hours, not days, determined by platform, power and operator limitations. Being able to operate sensors over a wide area and perform surveillance over days and weeks could mean fewer gaps in coverage and lower exposure of units on roads. A wide range of systems displayed at AUSA 2009 suggested ways to improve persistent surveillance performance. Among these were the a range of Unattended Ground Sensors (UGS), a new mast mounted surveillance system, panoramic vision systems enabling effective views under armor protection and improved, lightweight remote video terminals for the users.

Unattended Ground Sensors (UGS) are a central element in the U.S. Army Brigade Combat Team modernization effort. Part of the FCS Spin-Out program are two UGS systems developed by Textron Systems – the AN/GSR-9 Tactical-UGS and AN/GSR-10 Urban-UGS sensors, (also known as the Urban Military Operations in Urban Terrain Advanced Sensor System – UMASS). The two sensors will operate with common communications hubs and processing elements, to perform mission tasks such as perimeter defense, surveillance, target acquisition and situational awareness. When deployed, sensors are linked to a gateway system that transmits target data or situational reports back to the user, over the brigade’s wideband data network. In future scenarios, these sensors will provide the outposts for small units, equipped with unmanned systems and precision attack munitions.

These UGS will be triggering alerts in the presence of potential threats, other sensors, such as the Honeywell T-Hawk unmanned system (Class I XM156). This backpackable ducted-fan UAV system is powered by a small gasoline engine and is equipped with a small electro-optical payload assembly that can carry a daylight or infrared camera. The T-Hawk can hover over the suspicious target for about half an hour, or perch for longer periods from a nearby vantage point. Images from the UAV are monitored by the controller at the infantry squad, and also transmitted over the wideband network to the platoon command post for further action.

Persistent surveillance for brigade and below is one of the fields of improvement planned for future Brigade Combat Team (BCT) Enhancement. Current systems offering persistent surveillance are operated at division and above, used primarily in combating and preempting IED emplacements. Among the future systems that could be considered are specialized ground based sensor arrays, including combinations of sensors triggering each other when a target appears. Other sensors utilize ground surveillance radars and panoramic surveillance systems to provide ‘slew-to-cue’ functions pointing narrow-field EO systems. Another spin-off from the FCS program is being developed collaboratively by Lockheed Martin and Raytheon is the Mast Surveillance Sensor (MSS), employing a mast mounted version of the medium-wave multisensor (EO) system developed for the cancelled Manned Ground Vehicle (MGV) project. The system is applied with an advanced mission management and control system enabling wide area surveillance, tracking of targets of interest and investigation, using the high power zooms. The system also employs other on-board sensors fused into a fused panoramic view of the covered area.

360 degree surveillance can also be used to provide situational awareness for armored vehicles. Different cameras and imaging systems are currently available. HGH Infrared Systems has developed the IR-360 – a high sensitivity, high speed cooled infrared camera which sweeps over 360 degrees in one second, detecting and tracking multiple moving targets, in day or night, through fog, smoke or haze, detecting human movement in real time, beyond 1,000 meters. The system can be coupled with thermal/visual imaging system to support more detailed surveillance. The system is employing advanced image and IR processing systems developed by IEC Infrared Systems, which have also been integrated in two new systems introduced by IEC – the IntrudIR alarm and tracking system and M-1 NightStalkIR family of surveillance systems.

As more imagery data and intelligence reports are gathered at the lowest-echelon, and with the introduction of wideband datalinks and networking extending connectivity ‘to the edge‘, distributing imagery away from the sensor, to improve situational awareness at the company and battalion level becomes imperative. Receiving imagery and intelligence in real- or near-real time, annotating, tagging and storing large masses of information, and retrieving and presenting it on demand becomes a critical factor for future intelligence and operational planning.Today’s combat network radios are limited in their data transfer capacity and are inadequate to transport large files and imagery, therefore necessitating the use of dedicated wideband networks and datalinks. Analog and digital video links are currently used to transfer video from UAVs to remote users, utilizing the video link and display terminal known as OSRVT. These capabilities are being extended and enhanced, with the introduction of digital links, that enable rapid processing of ‘kill chains’, enabling ground forces to task, and clear fires from manned (attack helicopters) or unmanned (Predator, Hunter UAVs) assets teamed with ground units at every level, as part of the land-based combat unit. The key to this capability is having the ground unit commander monitor the aerial sensor payload view of the target through the OSRVT, clearing firing command based on their knowledge of situation on the ground. This procedure is different from the air-force practice of air support, where assets such as Reaper and Predator, or manned aircraft are conducting their attacks under different conditions, relying on guidance form joint tactical air coordinators or aerial recce.