AUSA, Washington DC, October 2009: A major future improvement anticipated today is the precision enhancement of indirect fires, at brigade level and below. Sofar the anchor of the Brigade’s precision fires artillery was the 155mm gun-fired Excalibur GPS guided projectile. Soon, more choices will be available with the introduction of precision 120mm mortars bombs and Precision Guided Kits (PGK) for artillery projectiles, enhancing the brigade’s organic precision indirect fire capability. In addition, Non-Line-of-Sight (NLOS) missile to be fielded by 2011 will introduce direct, simple, and effective fire support methods, applied at the lower echelon, without the support of forward observers and air/ground liaison teams. Precision attack could be further enhanced by improved guided long-range rockets such as GMLRS+ and the Hammer loitering weapon.

One of four priorities set for the second phase to be pursued by the new ‘Brigade Combat Team Modernization’ program is ‘enhanced precision mortar capability’, currently addressed by a number of companies, among them ATK, Raytheon and BAE Systems. One of the most mature products is the DAGGER GPS guided mortar bomb, developed jointly by IMI and Raytheon.

Similar effects for mortars and artillery rounds are obtained with the Precision Guided Kit (PGK) being developed by ATK. Raytheon is also offering the Spearhead PGK-2 guidance kits, configured for 155mm and 105mm artillery rounds. Fitting as replacement fuse on existing rounds, PGK uses Global Positioning Satellite (GPS) signals to monitor the flight path of the round and release corrects the trajectory of the projectile thus improving hit accuracy and reduce delivery errors to a circular error probable of 30 meters, regardless of the range fired.

The XM-501 Non Line Of Sight Launch System (NLOS-LS) will begin fielding with the first Brigade Combat Teams in 2011. The system provides a unique, flexible, platform-independent precision engagement system, empowering light and heavy brigades with immediate and responsive precision fires against moving and stationary targets and surface targets at sea. The system employs the Precision Attack Missile (PAM), designed to follow preprogrammed flight paths and in-flight target updates. Using the two-stage boost-sustain rocket motor GPS/INS to navigate to the designated target area, PAM can reach targets at a maximum range of 40 km and employs one of three attack modes – autonomous terminal homing, semi-active homing on a laser designated target or attack of a designated grid point. Being platform independent, loaded Command Launch Units (CLU) can be positioned at forward operating bases or pre-positioned in forward areas to support an unfolding operation. The CLU can be moved on tactical vehicles (HMMWV) or medium trucks (FMTV), sling loaded under UH-60s or air-dropped form C-130. Operating as networked assets, CLUs are operated as unattended units, remotely controlled directly by the supported unit. Once fielded, the CLU is expected to become a modular launch system accommodating a number of weapon types for different applications.

One system absent from the exhibition was the Griffin Small Guided Munition (SGM), currently under development at Raytheon. This small missile is expected to be a weapon of choice to be employed by UAVs and light helicopters, providing a localized, yet effective impact on the target, while minimizing collateral damage to non combatants and nearby troops.

The Guided Multiple Launch Rocket System (MLRS) has proved itself in combat as an accurate weapon system, delivering massive firepower rapidly and accurately over extended ranges. GMLRS+ is an evolutionary improvement of this weapon, being offered by Lockheed Martin under a product improvement initiative to enhance the capabilities of  Field Artillery operating the M270A1 and HIMARS launchers. The rocket adds two retractable aerodynamic surfaces that increased the rocket’s aerodynamic performance and extended range. Coupled with the use of terminal area seekers, such as the DAGR semi-active laser seeker, GMLRS+ can engage targets from different directions, adjusting its flight path to arrive at the target ‘over the shoulder’ of the target designator, thus reducing the risk of missing the target or homing in on laser reflections. The rockets launched in sequence can be programmed to impact the target simultaneously, gaining a maximum effect on target with fewer rockets. 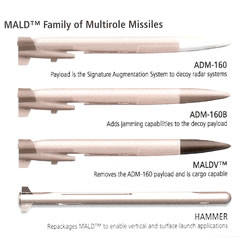 Another enhancement of the MLRS family could be the Hammer ground-launched multi-role loitering missile developed by Raytheon, unveiled at the AUSA exhibition. The Hammer was designed as a low-cost, land based loitering weapon system, based on the Miniature Air Launched Decoy (MALD) family, extending the Army’s electronic attack and Suppression of Enemy Air Defense (SEAD) capability. Powered by a TJ-150 turbojet engine Hammer sustains flight duration of 60 minutes at 30,000 ft. at a cruising speed of 0.6 mach. The missile can cover a range of 200-500 km guided by on-board GPS/INS navigation unit, offering long-range precision strike with unique re-attack capability. Flying an autonomous mission along a pre-programmed path, the missile can loiter over the target waiting for the radar or missiles to activate or receive and acknowledge target updated in flight, through a two-way communications link. A range of warheads available for the missile provide for different effects, from electronic attack, to semi-active laser targeting, to moving targets attack and all weather capability. The missile uses existing MLRS/HIMARS launchers, each loading one (HIMARS) or two (M270) six-pack containers. 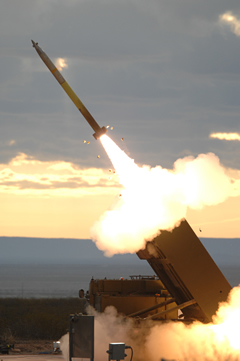