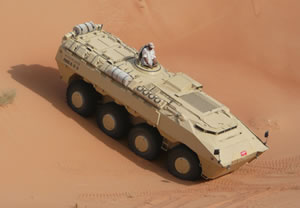 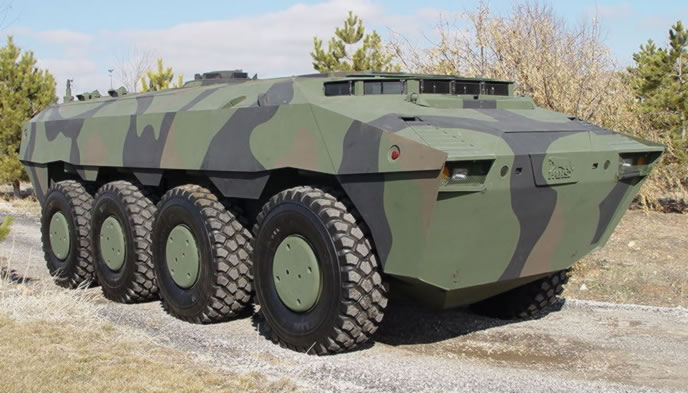 The Malaysian Defense ministry nominated the Malaysian company DRB-Hicom Defence Technologies (Deftech) a prime contractor to locally produce and supply 257 armored personnel carriers based on the Turkish 8×8 Pars wheeled armored vehicle. The Pars, developed and produced developed by the Turkish company FNSS is based on a design made by the U.S. company GPV. The value of the Malaysian ‘letter of intent’ is worth over worth about US$2.5 billion. Deliveries will span over seven years. The prototype APC is expected to be delivered for testing to the Malaysian Army by 2011. Deftech is to build 12 variants from the base vehicle, including personnel carrier, anti-tank weapon carrier, command and control and anti-aircraft weapon vehicles.

The APC version will be equipped with a two-man manned turret to be developed and produced by the South African company Denel. Sapura Thales Electronics (STE) will be the electronics system integrator.

The cost of the new vehicle seems excessively high – about $9.8 million per unit. Malaysian defense officials explained that these figures represent the total life cycle cost of the program, including which usually includes design, development, logistical support and sustainment as well as non-recurring engineering costs and investments associated with the set-up of local production facilities in Malaysia to develop its armored vehicle manufacturing. Yet, even when considering a 250% mark-up to cover such the price tag on the new Malaysian vehicle seem odd.

The Pars (Anatolian Leopard) armored personnel carrier is design and developed by the Turkish FNSS company, based on a design of U.S. based General Purpose Vehicles (GPV). The 8×8 configured Pars APC was officially unveiled in 2005 as a basis for a family of armored vehicles addressing Turkish Land Forces Command requirement. Heavier and lighter configurations ranging from 6×6 to 10×10 are also proposed by GPV and FNSS. The Pars has a modular design and can be fitted with various armament fits, including external and turret mounted armament. The vehicle can accommodate one- or two-men turrets as well as remotely operated weapon stations and specific mission equipment. The vehicle is operated by a crew of two, and can carry up 1

During field trials held in the UAE in 2008 the Pars demonstrated remarkable cross-country desert mobility. It also has full amphibious capability without preparation, utilizing the wheels for propulsion while swimming. With the use of optional hydrojets it can develop more speed and maneuverability. The Pars can be airlifted inside the C17 or the future A400M transport aircraft ordered by Malaysia back in 2005. According to Malaysian defense officials, the order for four aircraft remain in effect although the delivery of the aircraft could be delayed by 3-4 years.

Deftech is a leading supplier of defense material to the Malaysian Armed Forces, government and security sector, Deftech is a wholly owned subsidiary of the DRB-HICOM Berhad consortium traded on the Kuala Lumpur stock exchange. The award announcement was released on first day of the the Malaysian defense exhibition DSA 2010.