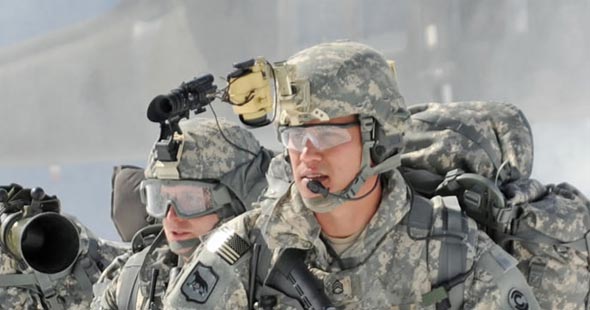 The ENVG is the first helmet-mounted night vision monocular to combine the strengths of both image intensification (I2) and infrared (IR, or thermal) technologies into one device. In 2005 ITT was selected by the U.S. Army to be the sole source for the system.

ITT’s ENVG optically combines an I2 image and an uncooled Infrared (IR – thermal) image, allowing for improved mobility and situational awareness. The monocular system uses I2 to provide clear target identification and IR to provide improved target detection. By combining the strengths of both technologies into one unit, soldiers are able to complete their missions more effectively.

The I2 capability operates by enhancing ambient light, whereas the infrared imager detects heat radiated from people, animals and other objects. His technology facilitates faster threat recognition and thereby reduces the possibility of collateral damage and fratricide. The I2 image generally provides better definition of details but cannot operate in conditions where ambient light is low or non existent (such as in caves, tunnels etc). I2 technology is also limited when ‘blinded’ by strong light or in daylight. Fusing the two channels systems can function under all operating conditions.

The development of the ENVG began in 2004 and first models were fielded in 2008 with special operations units. By early 2009 the 10th Mountain Division was the first regular Army unit to receive few hundred items. Sofar ITT has been producing the first generation Army’s AN/PSQ-20 ENVG under a sole source contract worth about $560 million. This contract expires by the end of 2010.

The current systems are more expensive, consume more power and heavier, compared to the systems they are intended to replace – PVS-7 and PVS-14. A future digital system ( ENVG – D) is expected to overcome these weaknesses and meet the Army’s objective weight and cost requirements.

Meanwhile, based on early lessons learned the Army made some improvements in the ENVG system, its fit and function, overcoming the weight. To compensate for the added weight, the helmet mount’s center of gravity was moved closer to the face, to increase comfort and stability. In addition, the system is now more compact and easier to stow in the pouch. The system is compatible with aiming lasers currently in use, allowing for a fully integrated system of thermal, laser, and image intensification.

The future ENVG (D) is expected to be lighter, more rugged and consume less power. One of the main advantages of the future system is its ability to become a display system for the soldier systems (weapon sight, wearable computer). It will also support digital image transfer to Digital Video Recorders (DVR), remote computing devices and communications systems. This new system is expected to incorporate digital image intensification sensors and new long-wave focal planes supported by advanced fusion algorithms, low-power electronics and microdisplays are expected to reduce power consumption. Parallel development of the Digital ENVG is underway at ITT, BAE Systems and DRS. The Army is expecting to field new and improved digital fused imaging goggles by 2014.

In August 2010 the U.S. Army Research Development and Engineering Command (REDCOM) selected three companies to provide 660 Enhanced Night Vision Goggles (ENVG) for testing. After the test and evaluation of these systems for about a year, the Army plans to exercise options included in these contracts, for the procurement of full rate production ENVGs over a period of two years. The awarded companies are ITT, L-3 Insight Technology and DRS Systems. The three contracts, each valued around US$250 million, cover the delivery of the 220 systems in the base year, (2010) and options for the delivery of production quantities in the years 2011-2013. 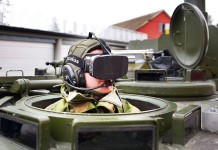