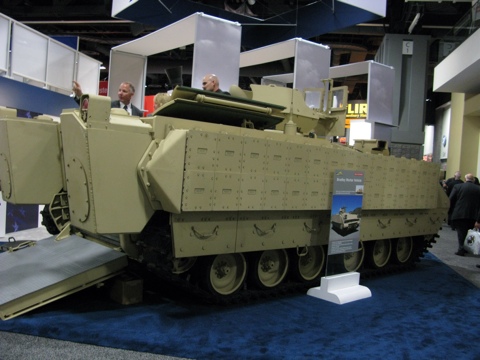 After more than five decades in service, the M113 is finally reaching the point where the Army looks for the replace this aging fleet. While originally the Manned Ground Vehicle (MGV) and Ground Combat Vehicle (GCV) were considered as possible platforms, BAE Systems is offering a new solution – the Bradley family of vehicles. The company has developed mission specific Bradley variants to fulfill and enhance the combat mission role of the M113. While such a proposal is sensible from a logistical point of view, it remains to bee seen how the new variants address the Bradley’s inherent survivability and interior space limitations. The Army considers its current version of Bradley ‘the most survivable platform in the force, next to the Abrams tank’, but this title comes with significant additional weight. The vehicles will be available at a vehicle gross weight ranging from 55,000 to 64,800 without tile armor and will be prepared to carry 11 soldiers.

The proposed family of vehicles expands the range of M2/M3 types with five new variants based on the bradley A3 – a command post vehicle, an armored medical evacuation vehicle (AMEV), armored medical treatment vehicle (AMTV), a mortar carrier and general purpose tracked vehicle.

BAE Systems is displaying the command vehicle at AUSA 2010, while the mortar carrier mounting the Israeli mortar (in use on the U.S. army Stryker) is displayed at the Elbit Systems stand.