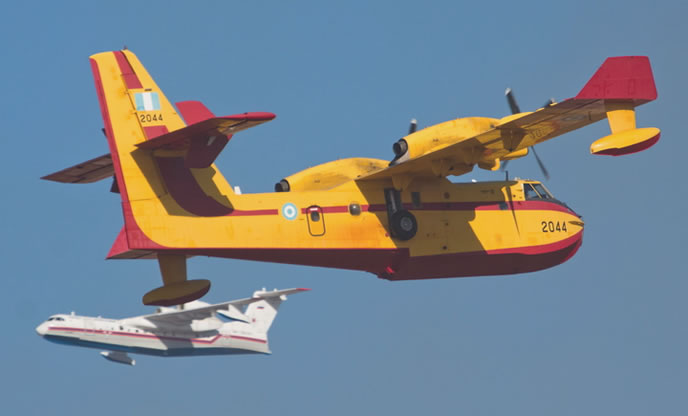 Above: Two amphibian firefighters joining the fight over the Carmel mountain – a Hellenic Bombardier CL-415 and Russian Be-200 Altair. Photo: Nir Ben Yosef.

Faced with the worst forest fire since last Wednesday, Israel mobilized all firefighters, law enforcement and Home Front command in an effort to fight the blaze burning Jewish, Druze and Arab settlements across the mountain. Lacking effective rapid response capable of fighting the fire in the dense, dry vegetation, firefighters called air support which was too late and too small to handle the fire, which turned into a deadly firestorm killing 41 in wardens, policemen and firefighters trapped by the blaze.

Devastated by the shocking news Israel’s Prime Minister Benjamin Netanyahu asked for international support. Within few hours firefighting materials, water bombers and firefighters began to arrive to fight the blaze. Firefighters from Bulgaria and Jordan, Specialized water bombers seaplanes – the Bombardier CL-215 ad 415 from Greece and Turkey, firefighting helicopters from Cyprus, including an RAF helicopter stationed in the island, huge Ilyushin IL-76 water bomber and Beriev 200 Altair seaplane from Russia all joined the fight. Even the huge Evergreen 747 Supertanker arrived at the scene to pour over 72 tons of water over the dying flames.

Inspired and encouraged by the demonstration of such airpower, Netanyahu directed the government to recapitalize aerial firefighting, a service that deteriorated through the past decade, after being privatized by the government. The new initiative directed at the PM office will have to allocate the resources to establish a firefighting squadron within the Israel Air Force or other governmental agency. Until now, Israel had to rely on a commercial service provider, operating eight Ayres Trush crop dusters maintained in readiness on firefighting alert. If such squadron is indeed activated, it will be ready to support Israel, as well as neighboring countries including the Palestinian Authority, Jordan, and Egypt.