The Department of Defense (DOD) budget is facing mounting pressure from both sides of the aisle as lawmakers struggle to rein in trillion-dollar deficits.

Read the news analysis on Defense-Update

“The Pentagon has lowered its expectations and is adopting a planning construct that assumes minimal budget growth,” says Shaun McDougall, Forecast International’s North America Military Markets Analyst and author of the latest Forecast analysis of the U.S. defense market. The DoD also considers maintaining and modernizing its force structure a top priority. Although there is often little in terms of low hanging fruit when it comes to rising personnel costs, the DoD has shown that it at least intends to make sacrifices in order to prevent cuts to its acquisition budget, and indeed to provide substantial growth to support its wide-ranging weapons programs.

It is clear is that DoD spending will be constrained in the years ahead, especially when compared to the expansive budget growth over the past decade. The White House projected about 1.8 percent real growth in FY11; growth is then expected to fall to 1.1 percent in FY12 and to below 1 percent after that. Furthermore, war funding will taper off as the U.S. completes its mission in Iraq, though volatile conditions in Afghanistan leave some budgetary questions unanswered.

Diminishing budget growth and supplemental war funding will be unable to support current DoD requirements. In addition, there is a growing concern that the services could lose some or all of their savings as the government attempts to pay down the deficit.

A number of major weapons programs are in the offing, including the SSBN(X) ballistic missile submarine, the Ground Combat Vehicle (GCV), long-range strike platforms, a presidential helicopter, and more. “Designing to affordability, and not just desire or appetite, is critical,” says Secretary Gates. “What remains to be seen is whether the Pentagon can live by this philosophy, and whether it will be willing to walk away from programs that fail to meet these standards” McDougall comments.

Read the news analysis on Defense-Update 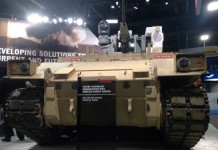