Home Exhibitions & Conferences IAI, DRDO on Course to Integrate Barak-8 on the First Vessel in... 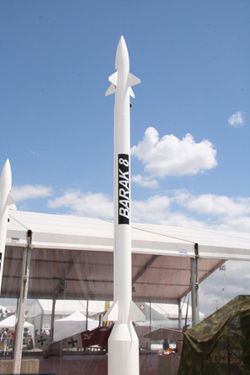 Test firing of the Barak 8 missile is expected this year. “Testing will be conducted in India and is part of the responsibilities of our strategic partner in this program, India’s Defense Research & Development Organization (DRDO)” IAI officials told Defense-Update. The missile is on schedule to complete development and be integrated on board the first combat vessels by 2012.

After being inducted into service, the system will continue development and phased improvement, toward its full operational capability phase. Barak 8 is designed to be fielded on both Israel and Indian Navy vessels.

In 2006 Israel and India embarked on a strategic cooperation in developing a new naval air defense system that will address the specific, common requirements of both Israel and Indian navies. The system, known as Barak-8 introduces a revolutionary concept of ‘network-centric air defense’, incorporating the best technologies India and Israel could offer.

Three years ago the program expanded this concept, adding another dimension to the Indo-Israeli cooperation, embarking on the Medium-Range Surface-to-Air missile (MRSAM) system, protecting strategic targets on land. Both programs are progressing well as IAI’s partners in India are actively involved and taking part in every phase of the development.