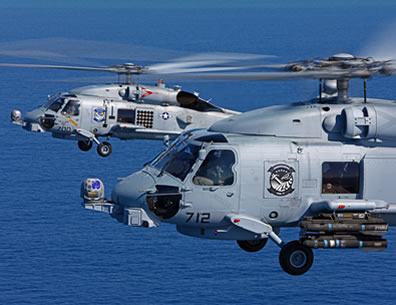 The Commonwealth of Australia signed yesterday the Letter of Acceptance, a formal agreement with the U.S. Navy. The Royal Australian Navy is expected to take delivery of the first two MH-60R helicopters in 2014. The Romeo aircraft will fulfill Australia’s AIR 9000 Phase 8 requirement that seeks a replacement capability for the Royal Australian Navy’s 16 existing S-70B-2 SeaHawk helicopters, which entered service in the late 1980s. In 2008 Australia terminated a local development of the SeaSprite helicopter, proposed as a successor for the SH-60B. The current selection also considered the NFH, a version of the NH-90, which offered commonality with the MRH90 battlefield transport helicopters selected for the Australian army.

“The MH-60R Romeo helicopter will fill a critical maritime warfare capability for the Royal Australian Navy,” said Rear Adm. Steven R. Eastburg, Program Executive Officer, Air, ASW, Assault and Special Mission programs. “U.S. naval forces have found the Romeo platform to be an operationally effective and reliable first responder for all missions and contingencies encountered at sea around the world.” Besides performing its primary mission roles of anti-submarine and anti-surface warfare, the multi-role aircraft also can perform search and rescue, troop transport, medical evacuation, ship-to-ship replenishment and humanitarian relief operations. The U.S. Navy began operating MH-60R aircraft in early 2006 and, since then, it has completed highly successful extended deployments. Sikorsky and Lockheed Martin will deliver the 100th Romeo aircraft to the U.S. Navy in late June. The U.S. Navy is expected to purchase 300 Romeo aircraft by 2018. In addition to delivering Romeo helicopters, the team plans to bring long-term jobs and work opportunities to Australian industry valued at $1.5 billion over 10 years. “We look forward to collaborating with the Royal Australian Navy and local industry across Australia as we build and integrate these proven SeaHawk aircraft.” Mick Maurer, president of Sikorsky Military Systems commented. The Australian selection marks a significant milestone for Team Romeo, as it is the first purchase of the U.S. Navy’s MH-60R helicopter outside the United States. Related posts: