With the Libyan campaign wrapping to an end, a new theater is broiling in Somalia, as Kenyan land forces are operating in southern Somalia, in an effort to route Al-Shabaab militants bases in townships near the Somali South-East border with Kenya. Like the Libyan campaign, the kenyan forces are assisted by foreign air and naval support. (Kenya Daily Nation)

Senior American officials in Washington said Sunday that neither the United States military nor the Central Intelligence Agency had carried out airstrikes in Somalia in recent days. One of the officials, who follows American military operations closely, said the Kenyan offensive had forced many Shabab fighters and commanders to disperse, making them easier potential targets, but emphasized that there had been ‘no U.S. military strikes in Somalia at all recently.’ (New York Times)

The U.S. has recently completed a forward operating facility at the Arba Minch civil airfield in southern Ethiopia, where MQ-9 Reaper drones are operating on counterterrorism missions, U.S. military officials told the Washington Post. According to the Washington Post story, a small annex was built at the base to house a fleet of drones that can be equipped with Hellfire missiles and satellite-guided bombs. The Reapers began flying missions earlier this year over neighboring Somalia, where the United States and its allies in the region have been targeting al-Shabab, a militant Islamist group connected to al-Qaeda. Officially, the Ethio­pian Foreign Ministry deny the presence of U.S. drones in the country.

Kenya said it was retaliating for a series of raids by Somali gunmen who have attacked and abducted foreigners from Kenyan territory. On its side of the border the Kenyan security forces are launching a crackdown on Kenyan residents suspected to be helping al Shabab. 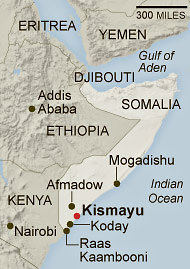 During the six-day campaign in six towns have already been captured in southern Somalia, including the pirates’ haven of Ras Kamboni, Dhobley, Tabda, Beles Qooqani, Oddo and Kolbio. Currently, Kenyan Army troops are heading toward the town of Afmadow, a junction town controlling transportation lines from Kismayu inland, where the militias are believed to be grouping to face the Kenyans, assisted by other Somalian forces loyal to the Transitional Federal Government (TFG). meanwhile, a French naval gunship patrolling Somali waters is engaging al-Shabab targets along the coastline, in the town of Kuday, south of Kismayu.

The main objective of the current campaign is the town of Kismayu, and nearby ports of Marka and Baraawe, providing the main source of revenue for al Shabaab, from port fees, business taxes and smuggling, providing the militant group over US$110 million per year. (Map link: New York Times)

Kenya are increasingly concerned about the prospect of al-Shabab attacking Kenya’s capital, Nairobi, and westerners. Last week, al-Shabab threatened to bring the ”flames of war” to Kenya.