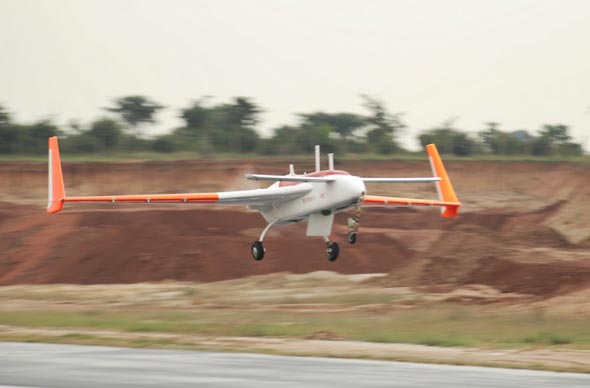 Rustom-1, the indigenously designed and developed unmanned air vehicle, made its fifth successful flight on Friday morning, November 11th, 2011. It flew for 25 minutes near Hosur at an altitude of 2,300 ft and at a speed of 100 knots, a DRDO release said.

The UAV, a “MALE” or medium altitude long endurance type, has been developed by the DRDO with the Aeronautical Development Establishment, Bangalore, as the nodal laboratory. It first flew in 2010. Mr P.S Krishnan, ADE Director, said in total, it was a success as all the modifications worked well and the 661-kg UAV achieved all the parameters. Specifically the objective was to test the modified lift-off scheme, modified altitude and speed hold logics, all of which “worked excellently”.

When fully developed, it can attain a maximum speed of 150 knots, height of 22,000 ft and fly for 12-15 hours in a range of 250 km.
The Army is interested in the programme. The release said, “The UAV can do military missions like reconnaissance and surveillance, target acquisition, target designation, communications relay, battle damage assessment and signal intelligence.” (The Hindu)