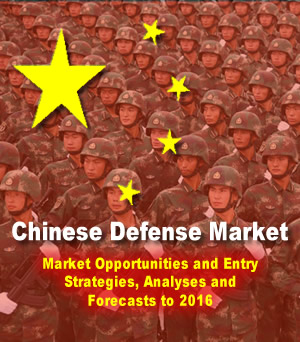 Opportunities and Entry Strategies, Analyses and Forecasts to 2016

China has the largest defense budget in Asia, and has the second-largest defense budget in the world. Due to the US and Western European countries imposing an arms embargo on China following the 1989 Tiananmen Square massacre, China has sought to procure advanced defense equipment by establishing a domestic, self-reliant, profit-making defense industry. China’s budget grew at a compound annual growth rate (CAGR) of 20.86% during the review period (2005–2010), which was fueled by the nation’s desire to become a global superpower, containing a strong economy and superior military force which can rival that of the United States. China’s defense industry has also benefited from the country’s strong economic growth, which has enabled large sums to be allocated for its defense industry.

Although the US currently dominates the world’s political, military and cultural outlook, China aims to emerge as one of the world’s largest economic powers and threaten the US’s military and economic supremacy. As such, the country has focused on modernizing its defense capabilities through the acquisition of advanced foreign weapons, significant investments in its domestic industrial technology, and upgrading its strategic nuclear force. As such, China’s defense expenditure grew at a CAGR of 20.86% during the review period, and is expected to grow at a CAGR of 9.90% during the forecast period.

China has instigated a military modernization program, which focuses on developing its navy, air defense systems, missile defense systems, C4I (command, control, communications, computers and intelligence) capabilities and surveillance equipment. This program will continue throughout the forecast period with China raising its defense capital expenditure allocation from 34% of the total defense budget in 2010 to 39% in 2016.

China does not have access to advanced military technology developed in Western countries due to the arms embargo placed on the country by the US and European countries following the 1989 Tiananmen Square massacre. Despite this several foreign companies have participated in the joint development, assembly and co-production of a variety of civilian products with Chinese companies, which have the potential to be used by the defense industry. As such, China has integrated its civil and military industries, which enables civilian technology to be utilized for defense products and vice versa.

ICD Research is a full-service market research consultancy providing both online and offline research capabilities. Our areas of expertise include online research, qualitative and quantitative research, custom approaches, and actionable insights. Our capabilities provide a one-stop research and analysis service with full-spectrum consulting, from problem recognition and conducting fieldwork to the delivery of strategic recommendations. We deliver our expertise across a broad range of industry sectors and product lifecycle areas. From product innovation to brand management and CRM, we offer full service research and analysis that drives loyalty and lifetime value.