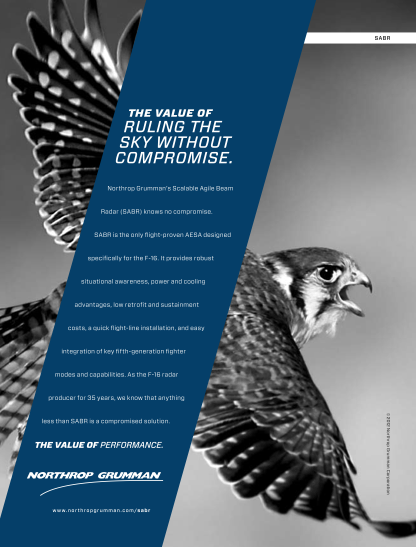 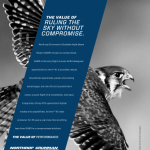 Today’s battlespace demands the very best in airborne Active Electronically Scanned Array (AESA) fire control radar solutions. Since mission effectiveness relies on the capability and reliability of the aircraft’s most important sensor, it is imperative that the solution is uncompromised.

Northrop Grumman has industry-leading radar design, development and integration experience, and has produced thou- sands of airborne fire control radars for the U.S. Air Force and numerous international customers over the past 35+ years. As a world leader and sole provider of AESA radars for 5th Generation Fighters, Northrop Grumman supplies the

AN/APG-77 and AN/APG-81 radars for the F-22 and F-35, respectively. The Northrop Grumman APG-80 AESA radar is the world’s first F-16 production AESA in operational use, and was recently deployed by UAE forces in the Libya campaign.

The Scalable Agile Beam Radar (SABR), designed specifically for the F-16, is the newest addition to the Northrop Grumman robust family of multi-function sensors. Leveraging Northrop Grumman’s world-leading AESA technology base, SABR was designed to maximize radar system performance within existing F-16 allocations. SABR is a full performance fire control AESA designed to the support next generation weapons and tactics, in the presence of the world’s densely-packed electronic threat environment. Backed by decades of experience in the design, development and integration of electronically scanned radar technology, SABR immediately showed its strong heritage, building an unmatched record of successful “firsts,” when flight operations started. SABR made its debut on an F-16 in November, 2009, making it the first retrofit AESA to fly in an F-16. Because of Northrop Grumman’s 35+years of experience with the F-16, SABR spent only 3 days in a systems integration lab (SIL) and quick-turned to flight at Edwards AFB. With only USAF flight test pilots and flight test engineers aboard, SABR flew 17 sorties with 100% mission success rate.

Since SABR’s initial unveiling, Northrop Grumman has continued efforts to expand capability and reduce risk. Our SABR system has accumulated thousands of operating hours in the lab and in the air, all without failure, demonstrating superior operational performance and reliability. The antenna has proven as robust as any of the other 5th generation AESAs Northrop Grumman has produced. SABR takes advantage of Northrop Grumman’s world-leading processes established for rapid, accurate production of the APG-77, -77(V)1, -80, and -81. Northrop Grumman produces AESA radars in a single facility at one location, allowing for tight quality control at every step. The facility houses both the AESA design and production teams. This enables cross-program synergies and rapid innovation producing very consistent, highly reliable systems. Unique in-house automated manufacture and test, antenna test ranges, and our one-of-a-kind flight engineering and test organization assure that SABR’s customers benefit from these synergies.