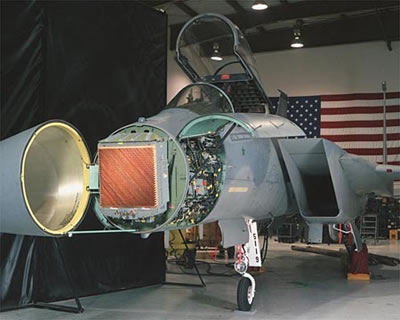 In the year 2000, the USAF fielded its first modified F-15Cs equipped with APG-63(V)2 AESA radars. Since then this radar evolved into the more compact APG-63(V)3, currently scheduled for Singapore’s F-15S. Raytheon continued the development of AESA radars and optimized the design with the AN/APG-79 developed and currently being fielded with the US Navy/Boeing F/A-18E/F Super Hornet. While AESA radars are distinguished by their simultaneous multi-mission performance, Raytheon claims to be the first to offer true simultaneous, air-to-air and air-to-ground modes, utilizing highly agile beam interleaving in near-real time, providing the pilot and air-crew unprecedented situational awareness and tactical flexibility. Utilizing a unique resource manager, the APG-79 automatically schedules tasks to optimize radar functions and minimize aircrew workload. Therefore, the radar can continue scanning while communicating with other aircraft and capturing ground imagery, and can simultaneously guide multiple weapons to multiple targets widely spaced in azimuth, elevation and range.

Northrop Grumman is developing several fourth generation AESA radars for several platforms. The AN/APG-77 is operational with the USAF/Lockheed Martin F-22 Raptor since January 2006. The AN/APG-81 developed for the F-35 Lightning II (JSF) and AN/APG-80 developed for the F-16 Block 60, built for the United Arab Emirates (UAE) – this model is also offered with the F-16 proposed for India’s MRCA program. APG-81 will introduce new capabilities yet unsupported by other AESA systems, including detection and tracking of both fixed and moving ground targets. It was the first time the actual radar is displayed in public.