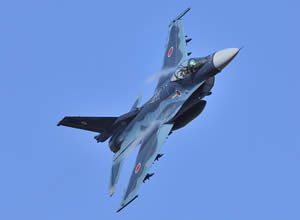 In a move destined to give Japanese defense manufacturers hope for the future, Aviation Week reported in late February that Japan plans to upgrade 60 F-2 fighters with Mitsubishi Electric Corporation’s AAM-4B missile, a $468 million deal.  This enhancement is expected to dramatically improve the lethality of the F-2 when engaging enemy aircraft.

A number of Japan’s Boeing F-15J fighter aircraft were equipped with AAM-4 missiles in 2007.  This version of the missile featured an advanced active radar seeker and integrated data link that allowed the pilot to fire and guide the missile to the target until the missile seeker took over allowing the aircraft to begin evasive maneuvers much earlier than in the past.

This deal will go far in helping Japan’s struggling aviation/military industry to continue operating in an environment of intense competition from international rivals.

The AAM-4B is fitted with a missile seeker featuring Active Electronically-Scanned Array (AESA) radar and a greatly improved data link.  The AAM-4B will be coupled with enhanced J/APG-2 radar that gives pilots a detection range far superior to what they have now.  Analysts believe that the AAM-4B will be deployed as a replacement for the Mitsubishi Electric license- built AIM-7F/M Sparrow’s now in service, a missile that was still in production as late as 2010.

With the AAM-4B’s active search capability, coupled to an upgraded J/APG-2 radar system, modified F-2’s are expected to be able to engage multiple airborne targets from medium range without having to close to visual range, greatly improving the aircraft’s survivability and deadliness.

The AAM-4B is reported to be the same size as the AIM-7F/M Sparrow missile, but its AESA radar seeker head will provide an active homing capability and after launch target lock affording pilots the flexibility to begin evasive maneuvers or focus on other threats sooner than is now possible.

By incorporating AESA capabilities into the AAM-4B, it seems possible that Japan has designed a uniquely capable air-to-air missile.  While most front-line fighters of today are outfitted with AESA, no known air-to-air missiles are similarly equipped.

In the 1980s, Japan began development work on the AAM-4, partly as a means of bolstering Japan’s domestic arm’s manufacturers and to expand the nation’s missile technology capability.  It is not known if the early AAM-4’s ever entered active service.

In the early stages of planning and development, Japan’s Defense Ministry’s Technical Research and Development Institute indicated that the AAM-4B could be launched from a far greater distance than the AAM-4, an increase in range of as much as 20 percent.  The Institute also stated that activation of the AAM-4B’s autonomous guidance system would be possible from a range 40 percent greater than that possible with the AIM-120B AMRAAM.  Also, the AAM-4B was reportedly designed to match or outperform the Russian AA-12 Adder.  The enhanced performance of the AAM-4B is claimed to be partly the result of an increase in the level of power transmission incorporated in the AESA.

It is expected that a modified F-2 launching AAM-4Bs would be able to discontinue tracking a target much earlier and from a greater distance than can be achieved with an unmodified F-2.  With the missile’s improved autonomous guidance system giving the aircraft extended firing range, the pilot will be able to target, fire, and execute evasive maneuvers sooner than is now possible.  The upgraded AESA is also believed to improve the F-2’s ability to locate, track, and target “crossing targets,” a scenario where an air threat is flying at a right angle creating a signal of the same frequency as that of the ground.

No information has been provided to indicate how the AAM-4B compares with Raytheon’s AIM-120D AMRAAM.  Some sources have expressed the opinion that the AIM-4B’s performance will hinge on the level of technology incorporated into the control and guidance systems and may not match the performance of Raytheon’s AIM-120C-7 variant, a missile that is eligible for export.

It is not known how many, if any, operating F-2’s are presently equipped to carry the AAM-4B, but Japan’s FY2012 budget submission does include funding for radar upgrades for 40 aircraft and fire-control upgrades for 16 aircraft.  Funding for the AAM-4B enhancements for 60 aircraft is expected to appear in future budget submissions, possibly to coincide with extensive maintenance plans.

Additional guidance system modifications will include upgrading the existing J/APG-1 AESA radar to a J/APG-2 standard.  The J/APG-2 is expected to maximize the capabilities of the AAM-4B by allowing for target detection at much longer ranges and to increase the probabilities of scoring a hit.  The J/APG-2 is known to be capable of generating significantly greater power and incorporates a signal processor that is faster and more reliable.  Japanese officials remain secretive regarding the specific J/APG-2 capabilities and have stated that they have not made any comparison with foreign-built radar systems.  Some sources speculate that the J/APG-2 might be comparable to Raytheon’s APG-79 carried on US F/A-18E/F Super Hornets.

The upgraded F-2’s are a critical part of Japan’s air defense system and can be expected to continue in an operational flying status, alongside Japan’s existing fleet of F-15J’s, for many years to come.  It is still uncertain if Japan will continue with its plans to acquire the Lockheed Martin F-35 Joint Strike Fighters or if they will select a competing aircraft to beef-up their air fleet.  What is known, with production of the F-2 now completed and discontinued, is that Japan is looking at a future that is getting ever more dangerous by the day.