The Syrian news agency SANA confirmed yesterday (June 23, 2012) that on 11:40 AM on Friday (June 22, 2012) the Syrian air defense forces have downed an ‘unidentified target’ that violated Syrian airspace coming from the west (seaside) at a very low altitude and at high speed over Syrian territorial waters. After spotting the aircraft Syrian air defense artillery units opened fire, hitting the target about one kilometer from the coastline, causing it to crash into Syrian territorial waters about seven kilometers west of the Om al-Tuyour village in the Latakia province. The two crewmen are still missing.

Apparently, the target headed west before crashing, hitting the water about ten kilometers from the coastline. The Syrian agency released a map showing the target’s route before the intercept. Syria has tried to play down the incident. Syrian foreign ministry spokesman Jihad Makdissi said the incident was “not an attack”. “There was no hostile act against Turkey whatsoever. It was just an act of defense for our sovereignty.” he said.

According to the map released by the SANA agency, the Turkish aircraft, apparently an unarmed reconnaissance version of the Turkish Air Force F-4E, was circling at higher altitude in Turkish airspace north of the area, possibly using Long Range Oblique Photography (LOROP) payloads (similar to the system Turkey bought in Israel few years ago). LOROP provides high quality imagery form very long range (up to 100 km), when taken from high altitude. However, it is less suitable for fast, low-altitude tactical recce missions characteristic of the final dash the Phantom performed just before it was shot down. What drew the pilot to act this way? One possible explanation for the Turkish maneuver is an Electronic Intelligence (ELINT) gathering mission.

The Turks confirmed that two Phantom fighters (the type was not identified) have left the Erhac Air Base at around 09:30 local time, one of these planes disappeared from the radar screen about one and half hour later. Turkish authorities said the plane was flying in international airspace but crashed in Syrian waters near Latakia. They admitted the plane had entered Syrian airspace but quickly left when warned by Turkey and was shot down in international airspace several minutes later.

Officially, Turkey said the planes were on a training mission but more likely they were on a reconnaissance mission, peeking along the Syrian Mediterranean coastline, where Syria is known to maintain a strong anti-aircraft, coastal defense and radar coverage. Based on the flight profile (if the Syrian description is correct) the Turks could have performed a ‘teasing’ game, in an attempt to stimulate the Syrian air defenses to activate their fire control radars, therefore give away critical data that could be used to optimize electronic countermeasures if NATO decides to involve in the situation and enforce a ‘no fly zone’ over Syria, similar to what the alliance did in Libya in 2011. Apparently, the Syrians weren’t tempted, and challenged the intruder with anti-aircraft fire rather than surface-to-air missiles. Under these circumstances, the downing of the Turkish jet could have been a miscalculated unlucky rather than lucky shot.

Indeed, Turkish foreign minister, Ahmet Davutoglu said the plane was “on a training flight to test Turkey’s radar capabilities and had no covert mission related to Syria”. Davutoglu, said Ankara would formally present the incident to its NATO allies to prepare a response under article four of the organization’s founding treaty. The article provides for states to “consult together whenever, in the opinion of any of them, the territorial integrity, political independence or security of any of the parties is threatened”. It stops short of the explicit mention of possible armed responses cited in article five.

The Libyan and Syrian air defense systems are similar in terms of hardware – SA-5, 6, 3 and 2, linked through an advanced command and control network and backed by a dense radar surveillance network. For the low level air defense, Syria uses the SA-8, and more recently deployed the SA-22 Pantsir S1, an integrated, autonomous missile and air defense artillery unit. The Syrian air defense is believed to be maintained at higher alert levels and better equipped with more modern equipment, including the new Pantsir (recently demonstrated on official video firing on a nearby coastal range), likely to be deployed in the western region. NATO is also concerned about the Russian intentions to beef up its garrison maintaining and protecting a small facility established recently at the port of Tartus, south of Latakia. Currently the base is manned my about 100 sailors and marines, but the Russians were reportedly preparing two landing ships loaded with Marines at Sevastopol on high alert, to be sent to protect the base if required.

Having a stronger Russian footprint in Syria could further complicate plans for NATO, if a decision to act is taken. 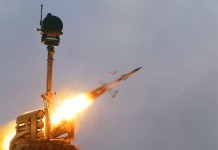