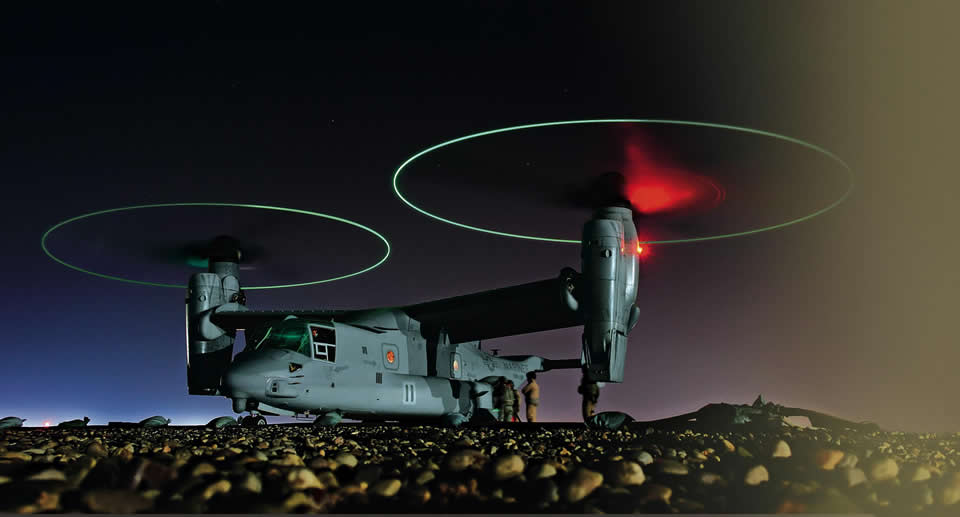 On 29 June, the US Department of Defense (DoD) announced that a squadron of Marine Corps MV-22 Ospreys will be deployed to Okinawa as planned, but will not engage in flight operations until investigations into two recent crashes are completed. The joint announcement emphasized that “Japan will be the only location worldwide where the United States will suspend MV-22 flight operations.”

This announcement came on the same day two MV-22s began a journey from North Carolina to England to participate in two international air shows. The MV-22s will be featured at the Royal International Air Tattoo and the Farnborough Air Show. The Pentagon has been clear that the Marine’s MV-22s and the Air Force’s CV-22s will continue “uninterrupted flight operations” in all worldwide locations including the continental United States.

The Marine Corps and aircraft builders Boeing and Bell Helicopter Textron hope that air show demonstrations will be a major step towards building international interest in the MV-22, interest they hope will lead to an acceptable level of lucrative international sales.

A preliminary investigation into the 11 April Marine MV-22 crash in Morocco determined that the aircraft performed as designed and mechanical failure was not the proximate cause of the crash. Preliminary results of the investigation into the 13 June crash of a US Air Force CV-22 in Florida reached the same conclusion, a mechanical failure did not contribute to the crash.

Pentagon officials expect to have the final crash reports in time to deliver them to Japan sometime in August. Until then, the Pentagon has promised that the MV-22s will not conduct flight operations in Japan. The aircraft will first be sent to Marine Corps Air Station Iwakuni in the southwest prefecture of Yamaguchi in late July to undergo full assembly and ground testing.

Deployment of the MV-22 Ospreys to Okinawa is needed to replace the aging Marine Corps CH-46E Sea Knight helicopters now operating from Marine Corps Air Station (MCAS) Futenma in Okinawa. The MV-22 has been selected as the Marine Corps’ medium-lift vertical transport of the future delivering a combination of range, speed, and lift capability the current crop of helicopters cannot match.

Despite the 29 June announcement that the Ospreys would be deployed to Okinawa, the governor of Okinawa Prefecture declared that the Prefectural government would not accept the decision to locate the MV-22s at MCAS Futenma. Japanese news sources are reporting that Governor Hirokazu Nakaima informed Japan’s Minister of Defense Satoshi Morimoto on 1 July that he rejected the planned deployment in recognition of issues that cast doubt on the Osprey’s safety record.

Although local jurisdictions have no legal means of rejecting the deployment of US forces, Okinawa residents have long opposed the continued presence of large numbers of US forces on the island leading to growing distrust of the Tokyo government. Governor Nakaima reportedly warned Minister Morimoto that deploying the MV-22s to Futenma could lead to mass protests and further strain relations between Okinawa residents and the central government.

Despite the MV-22s lingering reputation as the “Widow Maker,” the aircraft has accumulated a rather impressive safety record. Since 2001, the Osprey has proved to be one of the military’s safest rotorcraft in the inventory. In that time, three Ospreys have crashed at the cost of six lives while 414 helicopters have been lost at the cost of 606 lives during the same time frame. Of course, the helicopters have racked-up more flight hours in more diverse environments and under more trying circumstances in general.

The Marine Corps considers the MV-22 to be essential to the future of amphibious operations and the nation’s ability to successfully project power from over the horizon and in doing so, offer amphibious shipping enhanced protection. The aircraft is also claimed to be essential to the successful execution of humanitarian missions and disaster relief efforts. The CH-46E Sea Knight helicopters will be retired regardless of the situation in Japan and the only viable replacement available now is the MV-22.

What will happen when the Ospreys arrive in Japan is still unknown, but the fact remains that the Marines need vertical lift and the MV-22 is that lift, a fact that is not likely to change anytime soon.