The ministries of defense Israel and Italy have signed today two agreements formalizing several defense acquisition packages worth over two billion US$. The Government-to-Govenrment (G2G) agreements include the selling 30 Alenia Aermacchi M346 advanced jet trainers to Israel, as part of a €1.1 billion arms transfer. As part of the buyback agreement, the Italian MOD acquired two G550 Airborne Early Warning aircraft from IAI. Under a parallel transaction, the Italian company Telespazio has signed IAI as a main subcontractor providing a reconnaissance satellite to be operated by the Italian company for the Itailain MOD. The total value of the Italian acquisition is US$932 million.

The G550 CAEW is currently operational with the Israel and Singapore Air Forces. Once the deal is signed, the Italian Air Force will become the third operator of this type.

The aircraft is equipped with four-panel bi-spectral AESA radar, IFF and passive electronic support measures (ESM) covering 360 degrees, a NATO compatible communications system developed by Elta and SELEX-Elsag, and a central computing system. The aircraft is also equipped with self-protection system (SPS) utilizing passive and active sensors and countermeasure systems. The system relays all data to the ground operations center in real time, in addition, a crew of six operators can operate the systems on a stand-alone mission.

The satellite to be built for the Italians is believed to be latest OPSAT 3000 based observation satellite, equipped with the latest ‘Jupiter’ multi-spectral imaging payload from Elbit Systems, providing high-resolution imagery simultaneously in color and B/W modes. The satellite is in development by IAI/MBT Space Division.

The Italians are seeking to improve battlefield targeting, an operational requirement that evolved from the Libyan campaign of 2011. Such targeting capabilities should rely on employing advanced command and control, intelligence, surveillance and reconnaissance (C4ISR) capabilities for ad-hoc targeting.

As part of this learning process the Italian MOD is using a Gulfstream III business jet carrying multi-intelligence (MultiINT) sensors to collect, process and disseminate aerial intelligence and target information. The platform, known as the ‘Airborne Multi-Intelligence Laboratory’ (AML) was developed by Lockheed Martin and provided by the company for the Italian program. It will be used by the Italians to test and evaluate integrated airborne sensors for a period of 12 months. The US company is delivering the aircraft with three ground intelligence processing systems, flight crew and maintenance personnel. This agreement is for one year, with an option to extend to two years.

The Italian Air Force will use the AML, with ‘multi-intelligence’ sensor suite that include signals intelligence arrays and electro-optical/infrared radar, in a live operational environment for the next year. The system is based on open architecture enabling the integration additional C4ISR components (software and hardware) in a matter of hours. Lockheed Martin’s AML team includes L-3 Communications Systems-West, Rockwell Collins, FLIR Government Systems and DRS. The team is currently offering an operational variant of the AML as the ‘Dragon’ family of ISR platforms. The Italian order is positioned as the first sale of the ‘Net Dragon’ provided under the ‘ISR as a Service’ concept. 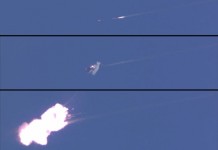 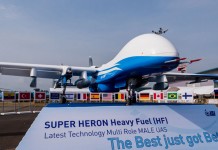