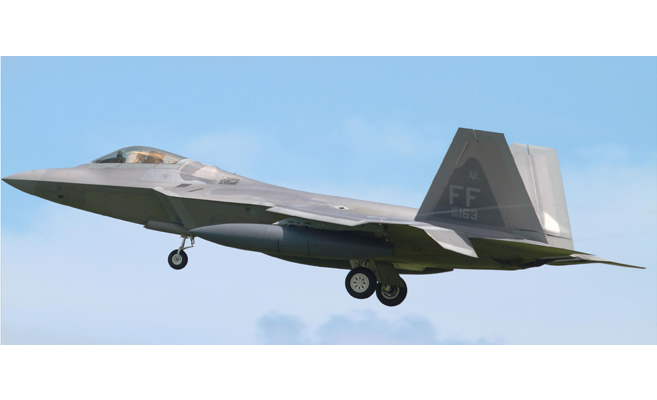 The first contingent of United States Air Force (USAF) F-22 Raptor stealth fighters arrived at Kadena Air Force Base located on Japan’s southernmost island of Okinawa on 28 July. USAF leaders see this deployment as an opportunity to demonstrate that the oxygen problems that have plagued the F-22 have been resolved and to highlight the safety and superior capabilities of the aircraft.

Eight of the Lockheed Martin Raptors landed at Kadena early Saturday evening with an additional four aircraft scheduled to arrive in the near future. The Air Force has been quoted as saying that this deployment represents the first step towards a return to “normal” operations. In flying to Okinawa, the aircraft followed a flight path that ensured the pilots had a landing site within range in case of an emergency and they flew at a lower altitude to lessen the possibility of a repeat of the oxygen problems that have led to the grounding of the aircraft in the past.

Secretary of Defense Leon Panetta approved the deployment of the Raptors to Japan and authorized an easing of flight restrictions on 24 July because, he stated, the Air Force had identified the cause of the hypoxia mishaps and initiated corrective measures to resolve the issue.

Recurring incidents of hypoxia, resulting from a disruption in the flow of oxygen, are believed to be attributable to a valve in the pilot’s pressurized vest. The Air Force says that the valve would sometimes cause the pressure vest to inflate and remain inflated creating a situation that limited the pilot’s ability to breath. Corrective measures include increasing the volume of oxygen reaching the pilot, replacement of the affected valves, and removal of a filter designed to detect contaminants in the aircraft’s life-support system.

In contrast to the recent spate of intense Japanese opposition to the deployment of Marine Corps MV-22B Ospreys to Okinawa, deployment of the F-22 Raptors has not ignited any significant protests in Japan.