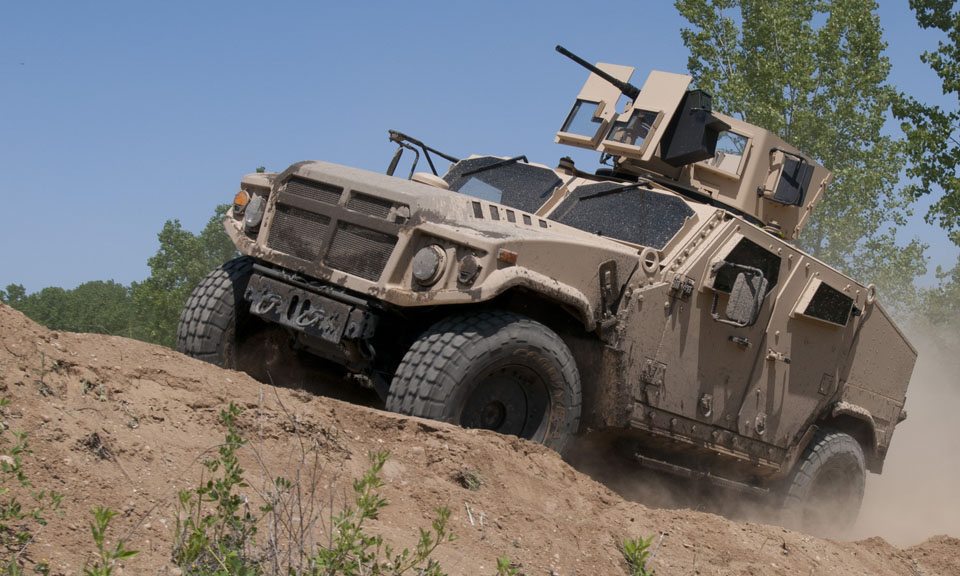 The Joint Light Tactical Vehicle (JLTV) program entered a new phase yesterday, with the award of $187 million in three contracts for the 27 months Engineering and Manufacturing Development (EMD) phase of the program. Two independent contractors, Oshkosh Defense ($56 million) and AM general ($64 million) along with an industry team lead by Lockheed martin ($66 million) were selected to proceed to the EMD phase. Each of the winning companies will deliver 22 prototype vehicles within 12-14 months, to be used for testing by the services. Primary variants with companion trailers include the utility carrier and shelter (JLTV-UTL), a two-seat prime mover with an open bed; and the general-purpose vehicle (JLTV-GP), which is a four-seater that will carry troops, ammunition and small supplies. Following the EMD phase the government will select a single contractor to produce at least 50,000 JLTV vehicles for the Army and 5,500 for the Marine Corps, at an estimated cost of more than US$6 billion. The JLTV program is closely followed by Australia, the U.K., Israel and Canada, although except of Australia, no foreign country has committed funding to the program.

Two of the three teams participating in the Technology demonstration phase did not make it – the General Dynamics – AM General (GTV team) failed to get its Eagle selected, so did the BAE – Northrop Grumman team, offering the Valanx, the vehicle originally developed in cooperation with Navistar Defense. Navistar was the only one of the three losing defense contractors that  briefly protested the awards, but withdrew its protest few days later.

What brought the teams to collapse before the EMD phase was the realization that the vehicle cost, weight and performance could not meet the new requirements. In January 2012 the Army stated cost targets of $230,000 – $270,000 for the vehicles, almost half the cost of the original vehicle and about the same cost that would involve upgrading the current HMMWVs. This ‘diet’ presented an advantage for traditional producers of tactical vehicles like Oshkosh, AM General and Navistar, that provide ‘vertically integrated’ supply chain under one roof, thus being more flexible in the allocation of manufacturing resources and cost margin of main subsystems (engine, suspension etc).

While the strategy of a single bidder worked for Oshkosh and AM General, it did not help Navistar get a piece of the action. Its strategic move leaving the team with BAE did not help either. While BAE is still part of the Lockheed Martin team, Navistar that went its own way to offer its newly developed ‘Saratoga’ design, lost on all fronts.

AM-General played the same strategy, and won. Both AM General and Oshkosh won with independent designs, developed outside of the government funded (technology development) track at the company’s private funding.

Wining one of the three EMD contracts is a major win for AM General, which fought hard to keep its share of the Pentagon’s vehicle procurement budget in the post HMMWV era. Sofar AM General was a single product company, based entirely on the HMMWV line produced primarily for the US Government. Throughout the evolution of the program AM General maintained its alliance with General Dynamics Land Systems, developing the Eagle technology demonstrator. At the last moment, on March 28 this year, the company sidestepped submitting an independent bid with its own BRV-O, while maintaining the team with GDLS. “As the most experienced tactical wheeled vehicle in the United States, AM general is uniquely focused on meeting the needs of the U.S. armed forces” Charles M. Hall, president and CEO of AM General said, “our team is prepared to move forward – shoulder-to-shoulder with our customer – on this critical national initiative.” AM general’s Blast-Resistant Vehicle – Off Road (BRV-O) prototype uses a crew capsule and modular armor already proven effective in government-supervised blast testing. It also features a lightweight, fuel efficient, high performance engine; a self-leveling suspension system; a C4ISR backbone with open-standard networked architecture and clustered super-computing power, and other advanced components. Its mobility technology, matured to meet Warfighter demands, accumulated more than 300,000 operational test miles and demonstrated high reliability and maintainability.

Oshkosh also demonstrated an impressive rebound into the JLTV program. Since 2006 Oshkosh has invested significant amounts in developing platforms and technologies to meet JLTV requirements. Originally teamed with Northrop Grumman and Plasan, Oshkosh lost the first (TD) phase back in 2008, but kept on improving the developmental Light Tactical All-Terrain Vehicle (L-ATV) on its own funding. “As a result, the Oshkosh JLTV delivers the latest automotive technologies, including the TAK-4i independent suspension system, along with advanced crew protection system, while meeting the JLTV performance at an affordable price” John Bryant, vice president and general manager of Joint and Marine Corps Programs for Oshkosh Defense said. He added that the intelligent independent-suspension system to provide significantly faster speeds when operating off-road, which can be critical to troops’ safety. Based on its modular armor design, the vehicle can accept multiple armor configurations, which allows the vehicle to adapt easily to changing operational requirements.

Market analysts consider the main competition will be between AM General and Oshkosh, but Lockheed Martin, the Pentagon’s largest contractor, isn’t ready to give up. The team established by the company in 2005 was the only team to survive through all the program phases and now they are playing to win. “We’ve had a consistent team since day one, and this win highlights the merits of a stable, proven design,” said Scott Greene, vice president of ground vehicles at Lockheed Martin’s Missiles and Fire Control business. ” The team includes BAE Systems tactical wheeled vehicles operations in Sealy, Texas, Other members include Allison Transmission, Cummins Engine, L3 Combat Propulsion Systems, Meritor Defense, Robert Bosch LLC and Vehma International of America. According to Scott, these production-ready JLTV EMD vehicles are more affordable than their predecessors, built with lower-cost materials, offering higher fuel efficiency and lower logistical support costs.

“Two JLTVs have been produced on an active manufacturing line, so we are already well prepared for rapid production and testing” Scott added. The team’s JLTVs offer enhanced crew safety based upon government tests that show the design meets the high blast-protection standards, with margin, of many existing mine-resistant vehicles serving in combat today. This diet has reflected in significant weight loss, “The Lockheed Martin team shaved hundreds of pounds off the TD design, which was already proven in helicopter lift tests.” Greene added.