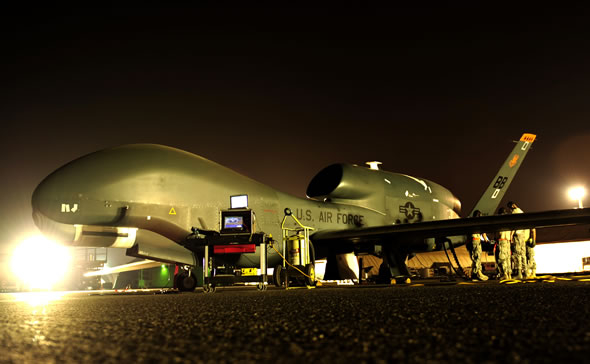 On 21 December, the Defense Security Cooperation Agency (DSCA) notified Congress of a possible sale of four Northrop Grumman RQ-4 Block 30(I) Global Hawk UAVs to the Republic of Korea (ROK) for an estimated sale price of $1.2 billion. The proposed sale would include provisions for related equipment, training, and necessary logistical support.

Since the proposed sale would be administered through the Foreign Military Sales (FMS) program, Congressional notification is required by law. Notification does not constitute a completed sale. While this sale requires Congressional approval to finalize, such approval is not likely to encounter any serious opposition.

The Global Hawks being considered would be equipped with the Raytheon Enhanced Integrated Sensor Suite (EISS) that combines infrared/electro-optical capabilities with synthetic aperture radar imagery, intelligence imagery, and moving ground target tracking. The Global Hawks will be delivered with all the ancillary equipment required for operational deployment to include test equipment, launch and recovery systems, ground and flight test support equipment, communications gear, repair parts and spares, as well as technical documentation, training, and logistical support.

Although the notification specifies the RQ-4 Block 30(I) as the aircraft under consideration, the EISS was featured as standard equipment on the earlier Block 20 version of the aircraft.

A proposed Global Hawk purchase was postponed by South Korea in late 2011 due to concerns related to pricing and aircraft performance. Officials in Seoul also expressed frustration with continuous delays in getting Washington’s approval for the purchase.

Washington’s foot-dragging on the deal has been a major disappointment for South Korean leaders and military commanders. The United States has moved slowly in recognition that the RQ-4 Global Hawk might violate Missile Technology Control Regime (MTCR) export guidelines.
The MTCR, a voluntary body representing 34 nations, was created in 1987 as a means of limiting the proliferation of ballistic missiles and other unmanned systems that could be used to deliver nuclear, biological, or chemical munitions. Member nations agreed to restrict the export of unmanned delivery systems designed to travel at least 300 kilometers with a payload of 500 kilograms or more. The Global Hawks technically fit this definition, but the DSCA notification did not include a request, as required, for an export waiver.

Earlier in 2012, President Obama’s administration gave Seoul approval to increase the range of its ballistic missiles to 800 kilometers provided the payload capacity remained limited to 500 kilograms. This approval also authorized Seoul to deploy UAVs, with a range in excess of 300 kilometers, to carry a weapon’s package of 2,500 kilograms or less. Unmanned drones capable of reaching a range of 300 kilometers or less can be deployed without limitation to payload.

Now, in the aftermath of North Korea’s December 2012 satellite launch, Washington recognizes South Korea’s need for an operational remotely-piloted craft with the Global Hawk’s capabilities. The shrinking export market for such high-value systems enhances the attractiveness of finalizing the proposed sale.

South Korea is scheduled to assume operational command of all ROK forces on the Korean Peninsula in 2015. Presently, the United States exercises operational command of all allied forces on the Peninsula through the Combined Forces Command, a command arrangement that can be traced back to the days of the Korean Conflict of 1950-1953. With this change in operational command comes the responsibility for intelligence gathering. South Korea does not currently have the hardware or experience to replace US forces as the primary source of intelligence, reconnaissance, and surveillance.

South Korea’s limited aerial reconnaissance capability is cited in DSCA’s notification to Congress as justification for the Global Hawk sale. US Forces Korea (USFK) currently has access to significant assets capable of performing reconnaissance and surveillance missions in Korea including the venerable U-2 spy plane, Global Hawks, and other operational systems.

On 26 December, South Korea’s Yonhap News Agency filed a report quoting an unnamed official indicating that Seoul may be considering the acquisition of other unmanned aircraft to include the Boeing Phantom Eye and AeroVironment’s Global Observer.

South Korea’s Defense Acquisition Program Administration (DAPA) has also been quoted as stating that a decision regarding the purchase of the Global Hawks will be deferred until later in 2013 following a thorough study of the terms being offered. DAPA representatives have indicated that Seoul is not yet committed to the Global Hawk and considers the price tag specified in the DSCA notification to be excessive. South Korean officials have said they are looking for a system package that could be purchased for $745 million or less.

The Global Hawk Block 30s have been subjected to criticism with several sources claiming the aircraft doesn’t live up to its hype. Many critics have slammed the performance of the Block 30 and also consider it to be overpriced in comparison to competing UAVs of comparable capabilities.

On 26 January 2012, the US Air Force (USAF) announced plans to discontinue the Global Hawk Block 30 program and increase procurement of the Block 40 model. The USAF concluded that the Block 30s were more expensive to operate and maintain than the long-serving U-2 manned aircraft and its sensor array was not equal to that employed by the U-2.

The US Department of Defense (DoD) Fiscal Year 2013 budget request submitted to Congress confirmed USAF plans to mothball the Block 30s in service and to discontinue all future buys to free-up additional money to fund the purchase of more Block 40 models. The USAF and the US Navy (USN) plan to continue operating other RQ-4 and MQ-4 models fitted-out with alternate sensor packages.

Contrary to administration desires, the FY 2013 National Defense Authorization Act (NDAA), passed by both houses of Congress and forwarded to President Obama for signature, rejected USAF plans to retire the Block 30 Global Hawks.

Global Hawks, in various configurations, are currently serving with the USAF, NASA, and Germany’s Luftwaffe. Other nations have expressed sincere interest in acquiring the RQ-4 including Japan, Canada, New Zealand, Singapore, and the Indian Navy has been looking at procuring as many as eight copies of the MQ-4C Triton Maritime Surveillance aircraft to serve in a Broad Area Maritime Surveillance (BAMS) role.

Despite USAF claims that the Block 30 model does not match the performance of the U-2, it does offer operators a much needed advance in surveillance and reconnaissance capabilities. In the vast expanse of the Pacific, now embroiled in potentially volatile disputes with China, a UAV of the Global Hawk’s capabilities roaming the skies would certainly help many national leaders in the region sleep much easier at night.