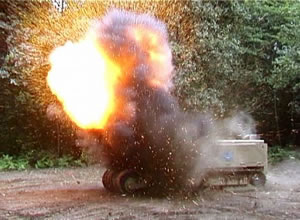 The US Army has been using the M160 remotely controlled flail robot built by the Croatian company DOK-ING in Afghanistan for route clearance missions. The Croatian built MV4 remotely controlled tracked mine clearance system has already demonstrated its ability to battle improvised explosive devices (IEDs) and Un-Exploded Ordnance (UXO) in Afghanistan and other war zones like Iraq, Nicaragua and Srilanka. By using the new robot, soldiers can clear routes without putting themselves in danger. Fielding of the M160 MV4 has been a priority of C-IED specialized ‘Task Force Rampant’ for some time now, said Command Sgt. Maj. Leonard Meeks of TF Rampant. The task force is engaged in developing and implementing techniques, tactics and procedures utilizing new technologies and capabilities for route clearing, combating IEDs in Afghanistan.

The M160 MV4 employs a ‘flail’ system, comprising a rotating shaft with 34 rotating chain hammers attached to disturb the surface of the ground in an attempt to detonate or unearth deadly mines and unexploded ordnance. The flailing action is designed to establish a safe path of travel for dismounted troops in the area. The system is effective in destroying anti-personnel mines on all types of terrain, soil and vegetation. The five-ton MV4 robot is produced by the Dok-Ing Company in Croatia. The company has already deployed more than 100 vehicles in demining operations throughout the world. Apart from the US Army in Afghanistan, MV4 vehicles are also operating in support of demining and route clearing operations with the military forces of Sweden, Iraq, Nicaragua and Sri-Lanka.

The vehicle uses robust frame, with the engine and vital components protected by steel plates to be survive all types of anti-tank mine. Due to its small dimensions the MV4 can be employed in confined spaces, such as house yards, orchards, wooded areas, riverbanks and other types of terrain, which are not accessible to larger machines. MV4 can be fitted with a variety of tool attachments including flails, used as the standard counter-mine tool. Other attachments include tiller, roller, dozer blade or gripper. The different tools are used to destroy even the smallest anti-personnel blast pressure mines and the most dangerous types of bouncing fragmentation mines. The remotely controlled vehicle can clear up to 2,200 square meters per hour when used in continuous mode. The company also produces the MV-10, a larger, heavier system designated to clear anti-tank mines.

The M160 MV4 is the first of its kind here and is the latest addition to the Mobilization Training Center, the route clearance training program at Fort Bliss. The first detachment from the First Army Division West’s 5th Armored Brigade’s “Task Force Rampant,” recently trained with the new vehicle at Ft. Bliss, as part of their preparation for deployment to Afghanistan. “Having this equipment available to train our reserve-component forces during their pre-mobilization training will allow these units to arrive in their forward-deployed theaters with a unique and critical skill set,” said Lt. Col. Aaron Dorf, Task Force Rampant commander.

The two-day training event included familiarization training, instruction of field maintenance and basic driving and maneuvering control skills. Following the proficiency training phase, operators were taught how to negotiate obstacles and conducted a practice run over 3,100 meter long test lane. Key to effective flailing was the ability to employ the M160 MV4 using a variable tool speed, the correct downward pressure and gear. Prior to entering the unclear area, soldiers must perform a soil test to check the effectiveness of the settings, and then adjust as necessary.