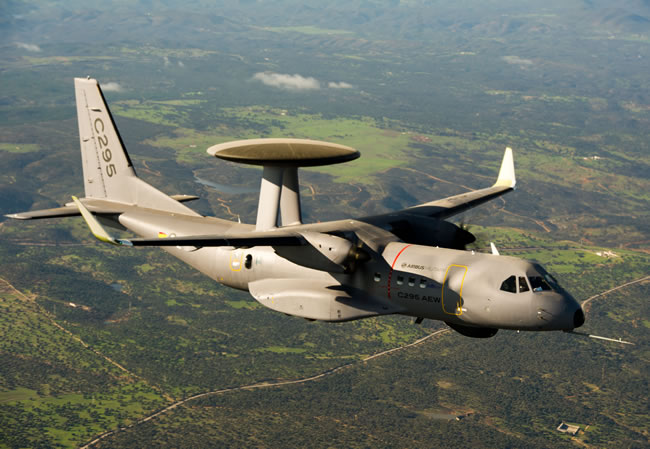 Airbus Military has begun flight-testing a modification to add winglets to the C295 medium transport and surveillance aircraft – one of a series of product developments underway on the market-leading type.

By increasing the lift-drag ratio the winglets are expected to improve performance in the takeoff, climb and cruise phases of the flight. For the C295 these extensions would contribute to hot and high runway performance, increased range and endurance, and reduced fuel consumption – driving lower operating costs.

The first flight of the wingletted Airborne Early Warning (AEW) configured aircraft took place in Spain on 21 December. Data from the flight test program will help evaluate the potential benefit and feasibility to incorporate winglets into the C295 design.

Extending the mission endurance of this aircraft is considered a critical requirement for Airbus Military, in order to meet the Indonesian Air Force requirement for Airborne Early Warning aircraft. Indonesia is already shopping for such aircraft, and, according to Air Force Chief of Staff ACM Imam Sufaat, larger platforms would be required for the country’s AEW mission, particularly in terms of endurance. It is expected that the improvements gained by those winglets would be sufficient to get the C295 into the game. The Indonesian market is considered a strategic market for the aircraft. In early 2012 Indonesia placed an order for nine C295 aircraft, the first delivered by the end of last year. Airbus Military is also helping its local partner PT Dirgantara Indonesia (PT DI) to modernize its manufacturing facilities to enable local assembly of these planes.

Few months earlier Airbus Military and missile developer MBDA performed flight demonstration of an armed C295 maritime patrol aircraft, carrying an instrumented Marte MK2/S anti-ship inert missile installed under the left wing. The flight was the first of a series of trials planned in a joint Airbus Military – MBDA collaboration to validate the aerodynamic integration of Marte on the C295. Subsequent flights will include handling qualities tests and aircraft flight performance tests. The C295 will be the first fixed-wing aircraft configuration for the missile. Marte Mk2/S is already integrated on the AW-101 and the NFH-90 naval helicopters.

The MBDA Marte MK2/S missile is a fire-and-forget, all-weather, medium-range sea-skimming anti-ship weapon system, equipped with inertial mid-course guidance and radar homing terminal guidance, and capable of destroying small vessels and heavily damaging major vessels. The missile has a weight of 310 Kg and is 3.85 m long. In the anti-submarine warfare (ASW) role, the C295 is already in-service carrying the MK46 torpedo.