The Indian Army, having long suffered from deficiencies in night fighting capability, is taking steps to correct this gap in equipping combat vehicles with advanced EO systems. Army chief Gen Deepak Kapoor, was  quoted by Frontier India saying: “Indian Army’s tanks have a night vision capability of 20 percent while Pakistani’s have 80 percent and China has 100 percent”. Following massive procurement of night vision devices for combat troops, the army is now set to equip its second line tanks with similar capabilities. The armed forces will review their doctrine, capabilities and shortcomings and also identify latest trends and technologies at a two-day seminar “Night Vision India 2013” scheduled next week.

The Army’s objective is to equip over 1,600 T-72 tanks that form the backbone of the country’s armored forces, with advanced night fighting capabilities. The Army’s case for acquiring 700 TISAS (thermal imaging stand alone systems) and 418 TIFACS (thermal fire control systems) for its T-72 fleet at a cost of around $230 million is in various stages of the procurement process. 300 Israeli TISAS were installed as part of several T-72 upgrade phases, followed by 3,860 image intensifier-based night-vision devices. A huge requirement persists. 310 Russian produced T-90S Main Battle Tanks were also fitted with French Catherine TI cameras.

The requirements for the Indian infantry formations are equally stunning. According to Major General RK Arora, editor of Indian Military Review magazine, the Army requires hand held thermal imaging (HHTI) sights integrated with laser range finders, for infantry, armored, air-defense, artillery and engineer regiments. The infantry is also looking for TI sights for medium machine guns and sniper rifles. RFIs for night sights for AK-47 assault rifles and other small arms have also been floated. On the horizon is the Indian Soldier System (INSAS) program,

Bharat Electronics Ltd (BEL) is the biggest supplier of night vision equipment to the armed forces. In 2007 the company has signed a memoranda of understanding (MoUs) with Elbit Systems Electro Optics ELOP Ltd, for the local production and support of thermal imaging systems. BEL recently supplied 30,600 passive night sights for rifles, rocket launchers and light machine guns, passive night vision binoculars and passive night vision goggles to the Army but the forces remain woefully short and are looking for the latest 3rd generation technology to reduce weight and extend the life of NVDs. 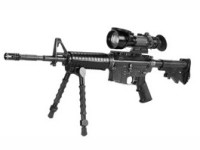 Another Israeli company to benefit from the Indian demand is SDS; the company received significant orders for its new lines of I2 weapon sights.

For the future, the procurement of new assault rifles and carbines for the Indian Army, replacing the INSAS currently used, will obviously require hundreds of thousands of sights, night vision sights and clip-on viewers, creating a signifiant drive for foreign companies to establish production in the country. The new rifles will also become part of the future infantry weapon system to be fielded by the Indian military and special forces.

The Indian military is also embarking on the replacement on the Indian 7.62mm Self Loading Rifle (INSAS), with a modern carbine currently in final evaluation. Through the initial screening process the military has narrowed five suppliers from 40 that approached the Request for Information (RFI) in 2010. Currently in the final phase are the US company Colt, Italian Beretta, Czech weapon manufacturer CZ, Israel’s IWI and Austrian SIG Sauer. The Indian military plans to buy at least 65,000 weapons directly from the winning manufacturer and follow on with local production of about 115,000 additional rifles to be produced by the Ordnance Factory Board (OFB). Eventually, additional procurement of 120,000  units could be added, with the planned procurement of Close Quarter (CQB) Carbines for military and paramilitary use. The total budget to be allocated for the program is nearly US$1.9 billion, spanned over several years. The new rifle will weigh 3.5 kg, and use two calibers, 5.56×45 and 7.62×39 cal and will come with a range of accessories, including under barrel grenade launchers, night vision scopes, optical or reflex sights and more.