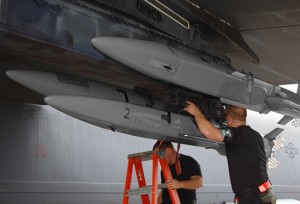 The team has completed ground verification test phase in November 2012, loading MALDs on Reapers at GA-ASI’s Gray Butte Flight Operations Facility in Palmdale, Calif., The integration of MALD on the aircraft is estimated to conclude in 2013.

MALD weighs less than 300 pounds and has a range of approximately 500 nautical miles. Various types of MALD are in service, including the passive decoy, programmed to mimic the signature of various aircraft and jammer-equipped decoys (MALD-J), loaded with jammers to carry out stand-in jamming of enemy radars. This version was first delivered to the US Air Force in September 2012; operational testing of this decoy are currently underway.

It is currently deployed with manned aircraft, primarily B-52, and F-16. Integration of MALD with the US Navy F/A-18E/F Super Hornet is currently underway. In 2011 Raytheon also demonstrated how MALDs can be deployed from the C-130, using the MALD Cargo Aircraft Launch System (MCALS).