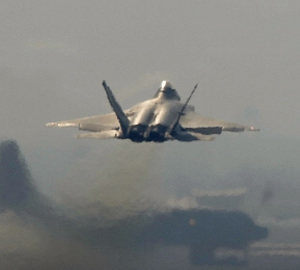 The U.S. Air Force announced the F-22 Raptor has resumed normal flight operations after modifications to aircrew life-support equipment were completed across the fleet, including the upper pressure garment and related hoses, valves and connectors. Completion of this task eliminates the need to restrict flight operations to remain within a 30-minute flying distance from an airfield suitable for landing. As part of their growing role abroad Japan based F-22s are taking in Operation Foal Eagle in South Korea. While their participation was planned months in advance, and was preceded by three previous visits, the current deployment is positioned as a tough signal to Pyongyang’s under the ongoing sabre rattling between North Korea and the USA.

F-22 crews have also resumed their aerospace control alert mission in Alaska after the Automatic Back-up Oxygen System was installed in aircraft based at Joint Base Elmendorf-Richardson, Alaska. Altitude restrictions have also been incrementally removed for F-22s that have received the ABOS modification. Altitude restrictions for training flights remain for non-ABOS equipped F-22 aircraft; however, those restrictions will be removed as each aircraft is modified.

The fielding of the ABOS provides additional protection to F-22 pilots while flying at high altitudes and in the most demanding oxygen-delivery scenarios. The first combat aircraft was modified in January at Nellis AFB, Nev. Elmendorf-assigned Raptors began modifications in February and officials expect combat fleet completion by July 2014.

In May 2011, Air Force officials stood-down the F-22 fleet for four months. This operational pause enabled the Air Force to accelerate efforts to study, define and fix the cause of the reported incidents. After the SAB completed its investigative actions in January 2012, the F-22 Life Support Systems Task Force formed a multiservice, multiagency team of government, industry and academic experts to review previous recommendations and findings. This increased breadth of experience, enhanced scope of knowledge, and additional impartial expert analysis led to the conclusion that a lack of oxygen quantity was causing the physiological incidents. The task force also determined the quality of oxygen was not causing the physiological symptoms reported by F-22 pilots and ground crew.

The Air Force said F-22 aircrews have flown more than 22,270 sorties and more than 27,500 hours since the last previously unexplained incident in March 2012.

Air Force officials will continue to leverage lessons learned throughout the F-22 investigative process and will invest in characterizing and better understanding the high-performance aircraft environment to improve pilot safety and performance in the F-22 and in all current and future weapon systems.