Home Cyber/C4ISR Communications Samsung is now cleared for use in the U.S. ... 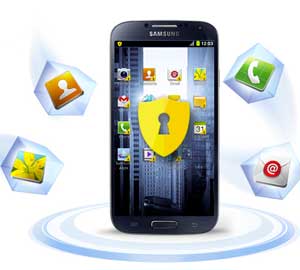 The handset maker announced that its Knox-enabled mobile devices have been approved by the Pentagon for government use. Samsung’s Knox software offers high-level encryption, a VPN feature, and a way to separate personal data from work data. The software also enables IT administrators to manage a mobile device through specific policies.

A little earlier , the Pentagon gave the same approval to BlackBerry devices with the BlackBerry 10 operating system, which translates into its Q10 and Z10 smartphones and Playbook tablets.

In the past, BlackBerry was the only hand held with high-level security on its devices. But Apple and Android have begun carving out of a chunk of this lucrative market. Samsung in particular is aiming to muscle in on BlackBerry’s territory with help from its Knox software.

The Pentagon approval means that the S4 and future Knox devices can be used by U.S. government and military departments that tap into the Department of Defense networks. Access to these networks requires high security standards, and the S4 is the first Android phone to meet the requirements, according to Samsung. For now, the Galaxy S4 is the only Samsung device equipped with Knox. But the company promises that other smartphones as well as tablets will receive the security software.