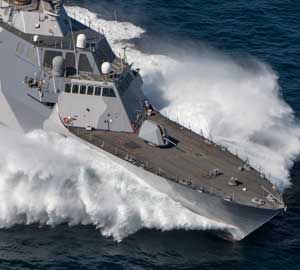 Exhibitors and delegates at the ninth International Maritime Defence Exhibition and Conference (IMDEX Asia) will have the opportunity to meet more key players from international navies, coast guards and maritime agencies as the biennial exhibition is set to host the highest number ever of Navy Chiefs from all over the world. This year’s show has attracted a record number of 21 Navy Chiefs from all over the world. In total, some 30 Chiefs of Navy, Coast Guard Directors-General and heads of maritime agencies from the Asia-Pacific region and beyond arewill attending at the show. The biennial show is organised by Experia Events with the support of the Republic of Singapore Navy.

Defense Update is covering the event on site, reporting news and features on Asia-Pacific maritime topics through the week.

Mr Jimmy Lau, Managing Director of Experia Events, said: “It is extremely encouraging to see that, despite uncertainty in the global economy, a record number of almost 200 companies have signed up to participate in IMDEX Asia 2013. The strong support from all our exhibitors affirms IMDEX Asia’s status as a must-attend event in the international naval and maritime defence calendar. This year’s show is set to be our biggest ever and we look forward to a successful few days ahead.”

IMDEX Asia, returning for its ninth edition from 14 to 16 May 2013 at the Changi Exhibition Centre (CEC) in Singapore, is recognised as Asia-Pacific’s foremost maritime defence show. Some 30 Navy Chiefs, Coast Guard Directors-General and heads of maritime agencies in the Asia Pacific region and beyond will be taking part in the event. IMDEX Asia 2013 will also showcase 15 warships from 9 navies from around the world with the participation of 15 warships from nine countries including Australia, France, India, Indonesia, Korea, Malaysia, Thailand, the United States and Singapore. These vessels will include, for the first time, the new Littoral Combat Ship (LCS-1) USS Freedom, which has just arrived in Singapore.

Debuting at this year’s IMDEX Asia are Technology Seminars, which provide a platform for exhibitors to present their latest and most innovative technologies to potential buyers from the Asia-Pacific region and beyond. The exhibition will also highlight an array of rigid-inflatable boats (RIBs) and unmanned aerial systems (UAS) in the Static Display.

IMDEX Asia 2013 will feature 194 participating companies from 29 countries around the world. This represents a 17% increase in exhibitors from IMDEX Asia 2011. As a testament to the show’s significance and continued ability to attract top companies, 40% are new exhibitors, including Devor Technologies, Fincantieri, Liquid Robotics, Lürssen Marine Technology, Scania, Schiebel, Westport Shipyard and Viking Air. Returning exhibitors include industry heavyweights such as Austal, DCNS, Lockheed Martin, MBDA, ST Engineering and ThyssenKrupp Marine. Among the Israeli exhibitors are IAI, RAFAEL, Elbit Systems, and Israel Shipyards.

Country/group pavilions at IMDEX Asia 2013 include Australia, France, Germany, Denmark, Italy, Singapore and the UK, as well as, for the first time ever, Israel. The Danish Pavilion, led by Naval Team Denmark, is making its return to IMDEX Asia 2013 with an even larger presence following its debut appearance in 2009.

Jimmy Lau said: “The increasing number of Navy Chiefs and VIPs attending IMDEX Asia is a testament to the growing stature of the event globally. With the Asia-Pacific region now the world’s second largest naval market, IMDEX Asia is more than ever a must-attend show in the international naval and maritime defence calendar. With new highlights and features in place for this year, we are confident that IMDEX Asia 2013 is more than ready to deliver an even greater experience for both exhibitors and visitors.”

Held in conjunction with IMDEX Asia will be high-level conferences such as the prestigious invitation-only International Maritime Security Conference (IMSC) and the first ever Asian edition of the International Naval Engineering Conference ([email protected] Asia). IMSC will gather Navy Chiefs, Directors-General of Coast Guard and heads of maritime agencies from around the world to discuss evolving challenges to naval security. “Conferences such as IMSC not only strengthen IMDEX Asia’s position as a mustattend event in the international maritime industry calendar, they also play an important role in cementing Singapore’s status as an important maritime hub” Lau added.