Home Regional News Asia Pacific How Dangerous is the S-300 Syria is About to Receive? 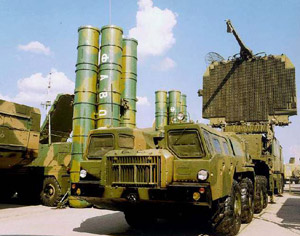 What are the implications of Moscow delivering S-300 air-defense systems to Syria, could one weapon system decide the outcome of the Syrian power struggle, is the Russian missile system as invincible as it is described? Alexey Eremenko from the Russian news agency Novosti provides some answers. Defense-Update reports.

“The missile batteries would give Syrian President Bashar al-Assad’s regime a powerful weapon against foreign air strikes” Eremenko comments, “one of the options being bounced around as a form of international intervention – and could fracture the fragile accord on Syria reached last week between Moscow and Washington, which hope to get the warring sides to negotiate.”

According to Eremenko, “Verifiable information about the S-300 deal is desperately scant: Was there a deal at all? What did it cover? Has any part of it been implemented? For now, what we know about the S-300 saga, from its origins to its implications, has been based on disappearing documents, anonymous sources, rumors, approximations and misunderstandings.”

Is there really a deal to sell Russian S-300 systems to Syria?

Technically, it’s all hearsay, according to Eremenko. The single evidence was a 2011 annual report by S-300’s manufacturer, the Nizhny Novgorod Machine Building Plant, which mentioned a contract for such missiles for Syria. However, the report has since vanished from the plant’s website. The Vedomosti business daily that commented about that story said the contract was worth $105 million and that an unspecified number of S-300 systems were slated for delivery between 2012 and early 2013. Based on the quoted price, the alleged contract would cover the infrastructure required for one battery only. (One S-300 missile system is estimated to cost some $115 million, the cost of each missile is over one million US$.)

Other reports commonly attributed to ‘western intelligence sources’ mention that Syria has ordered four S-300 batteries and 144 missiles, thus committing $900 million for such order. Deliveries of the hardware would commence by late summer. Other media sources reported initial shipments were made in December 2012. Russian official sources have stated that a contract covering the delivery of advanced air-defense systems to Syria has been signed two years ago.

Can the international community or any third parties affect the sale?

“The deal is strictly between Moscow and Damascus – which is to say, it’s all in the hands of Russian President Vladimir Putin,” Eremenko wrote, “all attempts to ban arms sales to Syria via the UN Security Council have been blocked by Russia. Of course, there is behind-the-scenes haggling and arm-twisting, but that’s unofficial.”

Why are the S-300s dangerous? They’ve been on the production line since 1978 – aren’t they outdated by now?

The S-300 systems have been modernized repeatedly to remain state-of-the-art airplane- and rocket-destruction machines. The S-300PMU2 Favorit can launch six missiles at once and engage 12 targets simultaneously, both at high and low altitude. The missile interceptors (effectors) used by the S-300 PMU2 outmaneuver any modern fighter, including F-16, F-15, F-18 and F-22, these missiles can also effectively hit cruise missiles at ranges of 40-70km. The same unit can also employ the latest 48N6E2 missiles to intercept short and medium range ballistic missiles that would be targeting the site. This missile having a maximum range of 195km is what makes the system ‘strategic’ When covered by by point defense missile systems, such as the SA-15 Tor or SA-22 Pantsir S1, an S-300 PMU2 would be virtually immune to standoff attack by precision guided weapons. The system is also designed to operate effectively even when subjected to severe countermeasures and electronic attack, which makes it especially difficult to suppress.

Who are the targets?

In addition to engaging fighter aircraft, cruise and ballistic missiles, the S-300 system will also pose acute danger to strategic assets flying well beyond the Syrian border, including Israeli or coalition support aircraft, airborne early warning, electronic warfare and monitoring or aerial refueling aircraft which are part of strike packages or aircraft supporting intelligence gathering and surveillance. “Any attempts by foreign powers to enforce a no-fly zone over Syria, as was done in Libya in 2011.” Eremenko wrote.

What’s the possible time frame? How long until Assad can shoot foreign fighter jets out of the sky?

The S-300 system deploys in five minutes – once it’s paid for, produced, tested, shipped, and manned by trained personnel. Novosti wrote, still, it would likely take a while before Damascus actually gets any missiles. However, there are few issues that would delay delivery. The manufacturer is unlikely to have ready-to-ship S-300 systems lying on the shelves: Whatever leftovers there were from a deal with Iran, scrapped in 2010, were long ago snatched up by other customers such as Algeria, according to Ruslan Pukhov of the Center for Analysis of Strategy and Technologies, a for-profit research group in Moscow. This means the systems would need to be produced and test launches conducted, a job that would take about a year, Pukhov said. “Furthermore, dozens or even hundreds of staff would have to be trained to operate the complicated machinery, which should take about six months. This would push Assad’s most optimistic deadline of owning fully operable S-300 complexes to November at best, with spring of 2014 being a more realistic estimate.”

According to Israel’s 1st TV news channel, Syrian soldiers have recently completed a two-month training on the S300 air-defense system in Russia. These crews are expected to become the lead cadre receiving the systems expected within two months in Syria. Israel is concerned about the possibility that the S300 systems will be manned by Russian troops in Syria. In the early 1970s Russian crews have maintained a full air-defense division in Egypt, assisting in defending the country from Israeli attacks during the War of Attrition that followed the Egyptian defeat in the Six Day War of 1967.