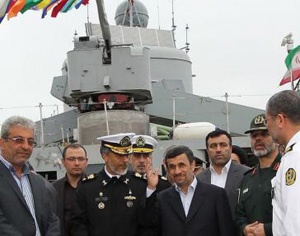 The Russian and Iranian navies are planning to hold joint exercises in the Caspian Sea in the second half of this year, the Russian news agency Novosti reported. According to Nikolai Yakubovsky, deputy commander of Russia’s Caspian Flotilla, the exercise follows a previous one held in 2009. Caspian Flotilla commander Admiral Sergey Alekminsky confirmed few months ago that that the two navies could strengthen their collaboration in the future.

Yakubovsky made the announcement after a meeting with the commander of a group of Iranian guided-missile boats that were visiting the port of Astrakhan. Iranian navy representatives welcomed the opportunity to take part in the joint exercises, but declined to discuss the plans in more detail. In 2009, Russia and Iran held their first joint naval exercise in the Caspian, involving about 30 ships.