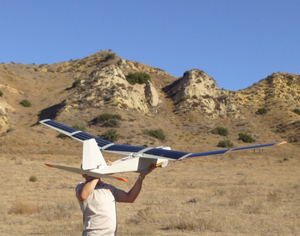 Minson added that with the new power source the RQ-12A would approach the capabilities envisaged for the next class of UAS at a much lower acquisition and operating cost, and with much greater operational flexibility. Minson said AeroVironment’s new long endurance battery extends Puma AE’s non-solar endurance to more than three hours. This means small UAS could be used for longer missions over greater distances than previously possible.

Minson added that past solar solutions for powering small UAS were either too heavy or did not produce enough power for long-range flight – or both. “However,” he said, “the solar Puma AE technology can produce enough power, while adding negligible weight, so that endurance is no longer an issue for most customer missions.”

In 2011 the US Air Force Research Lab (AFRL) pioneered the integration of a solar array on another Aerovironment drone – the RQ-11B Raven small UAS. In that demonstration solar cells, 20 square centimeters in size, were applied to the Raven’s wings, adhered to the wings of the vehicle using a clear, protective plastic film and an adhesive. According to AFRL researchers, the number of solar cells integrated onto the wing – and the amount of solar power provided to the SUAS – depends on the surface area of the wings. Back in 2011 AFRL researchers predicted the total improvement in flight endurance, considering the aircraft’s energy usage would also be improved, could increase nearly 300 percent. The recent test with the Puma AE has confirmed this AFRL prediction.