PZL-Świdnik, and Agusta-Westland have introduced the SW-4 SOLO Rotorcraft Unmanned Aerial System (RUAS) based on the PZL’s SW-4 light single engine helicopter. The unmanned ‘Optionally Piloted Helicopter’ (OPH) variant of the helicopter was displayed this week at the MSPO exhibition in Kielce, Poland. SOLO is based on a close collaboration between PZL-Świdnik and AgustaWestland.

The system will be used under the RWUAS (Rotary Wing Unmanned Air System) Capability Concept Demonstrator (CCD) programme, pursued by the Royal Navy, evaluating the utility of a conceptual multi-role UAV for the UK Royal Navy. A contract covering this evaluation has been awarded to AgustaWestland by the UK Ministry of Defence. The SW-4 SOLO is powered by a single 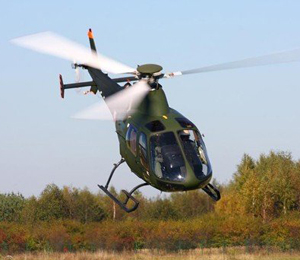 Designed for both unmanned and piloted operations, SW-4 SOLO would provide users with maximum operational flexibility, performing intelligence, surveillance and reconnaissance, missions as well as cargo re-supply at sea. In piloted configuration, the SW-4 can undertake a number of activities, including transportation of personnel, surveillance and intervention. It can be fitted with a comprehensive mission equipment package, including search, communications/intelligence systems and armament. As an optionally piloted platform, the helicopter can carry a pilot and four passengers, for utility transport and training. The SW-4 helicopter made its first flight in 1996 and was introduced into operational service with the Polish Armed Force in 2002. The SW-4 RUAS prototype was announced in 2010. The first prototype was displayed in public 2012 and was expected to fly in the piloted configuration in that year, moving to unmanned flight in 2013. However, until early September 2013 no announcements on such milestones have been released.