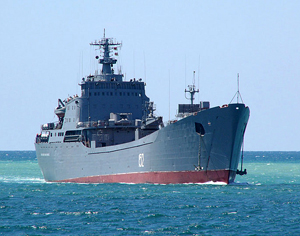 An Assessment solving the Syrian crisis – By David Eshel

According to latest reports from Russia, the large Landing Ship – Tanks (LST) Nikolai Filchenkov from the Russian Black Sea Fleet is on its way to the East Mediterranean, probably set for the docks at the Russian naval base Tartus, Syria. Having taken on board an unspecified “special cargo” at the Black Sea naval port of Novorossiysk, its mission is still a mystery.

The arrival of the Nikolai Filchenkov in Tartus is not the first that Russian landing ships made to this port. Only recently the Russian Interfax news agency reported the LST Novocherkassk, (carrying 150 marine special forces) and Minsk (with 300 troops), were sent to the Syrian port, although their mission was not specified. According to the website of the Russian Black Sea Fleet the Filchenkov can carry 300 troops + 1,700 tons of cargo, including about 20 tanks and trucks or 40 AFV’s.

The recent mission coincided with an unplanned US-Russian summit at St. Petersburg. Although no such meeting was priori arranged between President Barak Obama and Vladimir Putin at the G20 conference in St Petersburg, the meeting between the two leaders (just them, no staff) lasted 30 minutes. Following the meeting no announcements were given to the media, which seems strange under the present Syrian crisis, that has already dominated the Summit.

No doubt should exist between both presidents, that the situation calls for decisive action to prevent the Syrian chemical arsenal, especially prevent its delivery systems falling into the hands of islamic extremists and terrorist. This is a great concern for Mr. Obama and the Western world, but President Putin should be equally concerned in this matter. The amalgam of Islamists that is assembling to fight Assad appears to include a healthy contingent of radical-right Islamists from Chechnya, and they’re reportedly among the toughest fighters in the anti-Assad coalition. Their contingent, according to a European press report, led the assault that took control of a Syrian Air Force base in the country’s northern sector. Should these dangerous elements seize chemical depots, it would become an immediate threat to Russia. One should remember the terrorist attacks in Moscow 2002-2010 and Putin needs not much imagination what horrifying effect chemical weapon substances captured in Syria could cause. So it would be only natural that a man like Vladimir Putin, a veteran KGB officer, and special forces expert would act to prevent such a potential disaster from happening – and time is getting short.

The exact size of Syria’s chemical weapons arsenal is not known with any precision, though the French government has estimated it to be more than 1,000 tons. This is believed to be one of the largest stockpiles of Weapons of Mass Destruction (WMD) existing in the Middle East today.

But if any one, the Russians should know the exact inventory. The weapons were stored originally in five major locations – near the cities of Latakia, Palmyra, Homs and Hama, all in the north and central part of the country, and at al-Safir, near the Turkish border. However, weapons have been moved around the country over the last year for operational reasons, a process that has recently accelerated as the threat of a retaliatory strike by the U.S. has increased. The obvious target for storing these safely for the regime would be the coastal mountains in which Bashar Assad’s Alawite minority still dominates the scene.

Moreover, it seems logical that under the mentioned circumstances, Russian special forces based at Tartus, could have been directing these critical movements. In fact, western intelligence monitoring the chemical weapons hideouts, indicate that underground storage depots, which may include chemical weapons have been sighted in the coastal mountain region of Latakia, the Alawite stronghold. These locations are conveniently accessible to the Russian Naval Port of Tartus, where the LST Nikolai Filchenkov is likely heading.

So what could be more natural to solve the Syrian crisis, which is already nearing a political, if not military disaster? It would be to remove the fuse from this ‘time bomb’, remove the critical parts of the Syrian chemical weapons arsenal, especially its delivery systems and most vulnerable and dangerous agents, before the entire Middle East enters into another highly dangerous quagmire, which no one really wants. Such means could include specific warheads, sarin and VX binari agents (which can be carried safely to a temporary storage area in Russia)

The only person which could solve this problem is President Vladimir Putin, who has both the means and the persuasive power to get Assad to allow Russian special forces to remove chemical weapons in time and load them carefully onto the Nikolai Filchenkov and if required on more Russian fleet transports who could arrive at Tartus on short notice. With such a move, President Obama would be off the hook, making his unwanted and quite questionable military strike unnecessary, also saving a lot of face should matters go wrong, as they usually do in this region.

President Putin, the clever fox, would gain two winnings with one move – removing an imminent threat from his Islamic opponents by preventing laying their hands on WMD and also gaining top prestige by clever manipulation as a political genius. Even Bashar Assad would be freed from a future danger, if the Islamic Rebels could capture chemical weapons, or even one of his own generals opting to use them himself when pushed with his back against the wall, even against his direct orders from Damascus (is this what really happened on August 21?).

The next days will show, if this assessment will become reality, let us hope so!

About the LST Nikolai Filchenkov

The Project 1171 Tapir Large Landing Ship (Bol’shoy Desatnyy Korabl’ BDK) is a beachable, general-purpose LST-type design with bow and stern ramps for unloading vehicles. Produced in at least four different types beginning in 1966, there are numerous variations in detail between units. Many have been retired, and remaining units may be in reserve, given the Russian Navy’s decreased emphasis on amphibious operations. Large Landing Ship “Nikolay Filchenkov” was built by Yantar Zavod, Kaliningrad. Laid down 30 Jan 1974, completed 29 March 1975, commissioned on 12 Dec 1975.[/box] 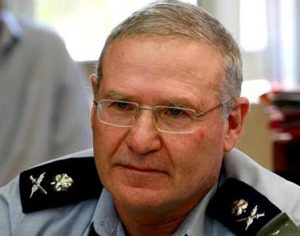 A United States Attack on Syria and its Implications for Israel 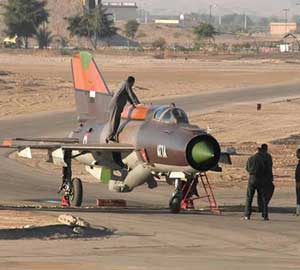 Russia Plans a Permanent Naval Task Force for the Mediterranean