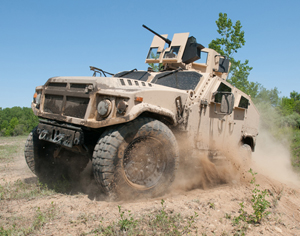 Full-pace, full-scope testing of the Joint Light Tactical Vehicle prototypes began Sept. 3 and will last for 14 months. Each of the three vendors — Oshkosh Defense, Lockheed Martin and AM General — delivered 22 vehicles and six trailers for testing to three sites — Aberdeen Proving Ground, Md.; Yuma, Ariz.; and Rrs 14 Medstone Arsenal, Ala. according to Col. John Cavedo, the Joint Program Office managerThe test program includes rigorous reliability testing over various terrains and in different weather conditions and protection-related testing is being conducted.

Cavedo said the program is still on track despite this year’s sequestration and the continuation of continuing resolutions, but warned that if the budget issues are not resolved by next year, he could not rule out a slip in the schedule. “We’re doing everything we can to keep the program on track,” he said, emphasizing the importance of the program to meeting asymmetrical threats like those experienced in Iraq and Afghanistan.

With military forces facing ‘asymmetric’ warfare in contemporary conflicts, that notion of front lines and rear area was no longer applicable after 9/11. As the military has deployed to Iraq in the mid 1990s ‘soft’ vehicles such as the Army’s ‘Humvee’ became vulnerable to improvised explosive devices no matter where they were. Up-armor was added for protection but the enemy adapted to that with more lethal explosives.

The added weight of the up-armor taxed the Humvees’ performance and further limited its payload, which now included network gear. And, the Humvees were just getting old, with the first ones rolling off the assembly line about three decades ago.

Soldiers and Marines continued to be vulnerable, so the mine-resistant, ambush-protected vehicles, known as MRAPs, were developed. These had good payload and protection and helped save many lives over the last six years, but performance was sacrificed and Soldiers could not move with speed and agility around the battlefield, especially in the difficult terrain in parts of Afghanistan, he said.

Furthermore, the heavier versions of the earlier MRAPs could not be moved around the battlefield by helicopter and required strategic lift, which in turn required adequate runways for these big cargo planes to take-off and land.

The sustainment cost for the MRAP program increased over time, he said, as more variants were developed by different vendors. Parts were not interchangeable and mechanics had to get follow-on training, he said.

The JLTV closed the capability gap, addressing “the iron-triangle of payload, performance and protection,” he said. Its payload and protection is similar to an MRAP and its performance exceeds that of a Humvee.

Besides addressing the “iron-triangle,” Cavedo said the JLTV is designed to meet the needs of the commander for a variety of missions.

The commander can decide what level of protection JLTV needs for the mission, he said, pointing out that armor kits will be available for vehicles going into harm’s way. Also, some of the JLTVs will be equipped with heavy weapons, including TOW missile systems, while others can be used as light, utility vehicles.

Other kits include command and control and network gear. He said JLTV “plug and play” open-architecture technology allows for future networks and electronic devices to be installed without a vehicle redesign.

Powering the 21,000-pound gross weight JLTV and whatever kits and trailers are added on is a 300-horsepower fuel-efficient diesel engine. JLTVs also will be able to tow the thousands of legacy trailers that are still useable.

Incentivizing productivity, he explained, means that after giving the original equipment manufacturer, or OEM, the specs, like protection, speed, weight and so on, it is up to them to determine how it’s built and what the tradeoffs are.

He provided an example. Besides armor kits, the basic JLTV requires a certain level of protection, he said. There might be very exotic metals out there that are lightweight and offer exceptional protection, but the cost involved would be astronomical. So a tradeoff might be reached where steel or aluminum is used to keep the cost down but still meet the basic requirements. To be competitive, however, the thickness or type of material used might exceed basic standards but be within a reasonable price range.

Tradeoffs like this apply to the power and transmission features and to everything else on the vehicle, he said. They’re trying to be as innovative and competitive as possible with the other OEMs, yet they must stay below the $250,000 assembly-line figure.

There are other ways cost has been controlled. Instead of requiring each OEM to supply 35 vehicles, they were required to provide 22 for the testing phase, he said. That number is reasonable and adequate for an effective evaluation.

Also, instead of a cost-plus type contract, the JLTV is on a firm-fixed price contract.

Source-selection evaluation will start in early 2015, and conclude by July of that year when a single vendor will be selected.

At that time, 2,000 vehicles will be produced and be tested for three years with the focus on fine-tuning the assembly line, full-up system testing and so on.

By 2018, the first Army brigade will roll with new JLTVs, he said.

Production will total 49,000 JLTVs for the Army and 5,500 for the Marines, with the production cycle ending sometime in the 2030s.

Kits will initially be produced by the selected OEM but follow-on kits might use a different vendor, he said.

In conclusion, Cavedo said the JLTV comes at the right time at the right cost, and is the perfect match to the Army’s shift to the Pacific, regional alignment strategy and meets the requirements of the Defense Strategic Guidance of 2012 and the Army’s 2014 Equipment Modernization Plan.