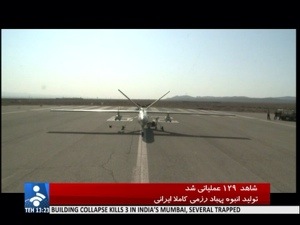 The Islamic Republic of Iran has launched the mass-production of the indigenously developed Shahed 129 unmanned aerial vehicle (UAV), which was unveiled in September 2012, the Islamic Revolution Guards Corps (IRGC) announced. The drone was displayed recently in an armed configuration, carrying four guided missiles (Sadid) loaded on two twin-launchers, carried underwing. Iranian sources stated the drone can carry up to eight ‘weapons’, designed to hit stationary and mobile targets alike. The specifications referred to by Iranian sources mention an effective operational radius of 1,700 km, datalink range (LOS?) of 200 km, flight endurance of 24 hours, and a flight ceiling of 24,000 feet. It has a monitoring capability of 200 km radius.

External stores are carried on underwing pylons, with sensor payloads installed under the nose in the front and at a payload bay at the drones’ center of gravity (CG), presumably for heavier payloads. The drones shown publicly did not have visible directional antennae or Satellite communicants terminals, hinting of other (less sophisticated and secure, probably commercial off the shelve satellite links for extended range comms).

Shahed 129 follows the Israeli Hermes 450 design, but given the performance quoted by the Iranians, is a more powerful platform with significant more payload capacity, compared to the Israeli drone. It’s external shape reflects significant advancement in composite materials fabrication, including the production of large airframe and structural elements. Strike missions employing guided weapons also indicate the evolution of compact yet capable sensors and datalinks, enabling the relay of target images and engagement of such targets in real time, over considerable distances.

In addition to the development of Shahed 129 Iran is accelerating its effort to verse engineer the U s secret RQ-170 Sentinel it captured in 2011, IRGC Brigadier General Hossein Salami confirmed. “All the memories and computer systems of this plane have been decoded and some good news will be announced in the near future not just about the RQ-170 and the optimizations that our forces have done on the reversed engineered model of this drone, but also in area of other important defense achievements,” General Salami said.

The unmanned surveillance plane lost by the United States in Iran was a stealth aircraft being used for secret missions by the CIA, US officials admitted almost a week after Iran captured the plane. The aircraft was among the highly sensitive surveillance platform in the CIA’s fleet that was shaped and designed to evade enemy defenses.

Iran has also uneiled a reverse-engineered version of the Insitu Scan-Eagle operated in support of the US Navy, and captured by the Iranian authorities. The drone displayed officially for the first time this week, uses the fuselage of the Scan-Eagle, with clipped wings, twin boom similar to the new RQ-21A intertor and inverted V-tail, similar to the one used on the RQ-7 Shadow.