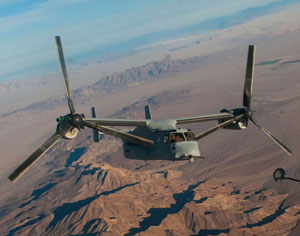 The US plans to expedite the delivery of six V-22 Osprey tilt rotor aircraft to Israel, Defense Secretary Chuck Hagel said. The Pentagon will reallocate part of the next production group originally destined to the US Marine Corps to meet the Israeli request for six aircraft. The V-22 is produced under a multi-year procurement, FY2014 budget plan is funding the production of 21 aircraft in 2014, including 18 for the US Marine Corps and three for the Air Force Special Operations Command. The USMC is intended to receive 78 such aircraft over the next five years. Israel will be the first U.S. ally to get the Osprey, which has excelled in combat operations in Afghanistan. Join as a member to get more insight

“Israel will get six V-22s out of the next order to go on the assembly line, and they will be compatible with other [Israeli defense] capabilities,” Hagel said. but Israel placed a formal request for the six aircraft this week, following its annual budget review process. Hagel announced the US is ready to offer the V-22 to Israel in April, but Jerusalem delayed its decision until the biennial budget is sealed. Israel could get the aircraft within as early as two years.

Boeing is optimistic about the future of the V-22, hoping that the first export sale would further increase international demand for the aircraft, thus help the company to face the decline in U.S. military spending in the near future. Discussions with Japan are already underway, as Tokyo is increasingly aware of the aircraft capabilities since the Marine Corps deployed the V-22 in Okinawa.

Other countries briefed about the Osprey include Saudi Arabia, Qatar, the United Arab Emirates, Italy, Brazil, Colombia, Singapore and Australia.