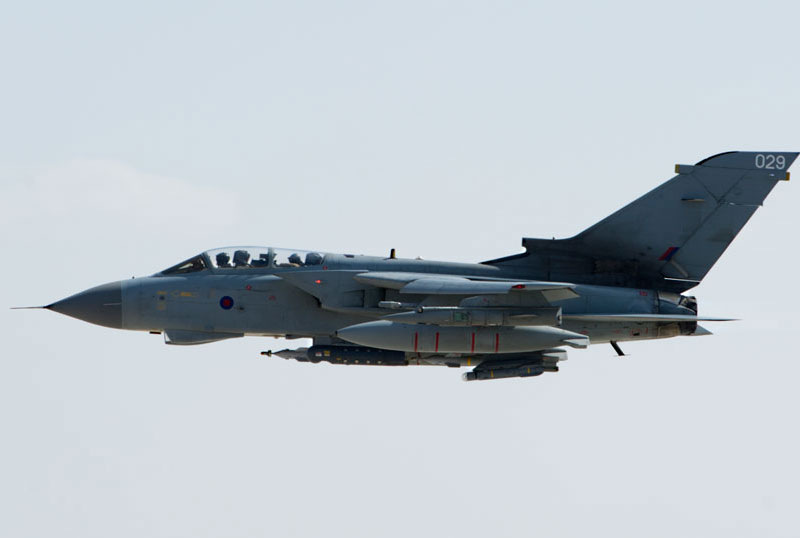 The following event demonstrates the force protection role of Royal Air Force Tornado GR4 strike fighters supporting ground forces in Afghanistan. On a recent mission in Afghanistan, two Tornado GR4s from II(AC) Squadron have yet again protected civilians and Afghan-led international forces on the ground by scattering insurgents who were attempting to plant a roadside bomb ahead of an ISAF convoy. Using the advanced Litening III surveillance pod, on 10 March the aircraft helped ISAF troops capture and destroy a lethal quantity of explosives that could have taken the lives of civilians or security forces.

The jets’ aircrew spotted insurgents placing the deadly improvised explosive device (IED) just hundreds of metres ahead of the convoy of US and Afghan troops, which II(AC) Squadron had been called to support following an earlier IED blast. II(AC) Squadron pilot Flight Lieutenant Geoff Williams flew one of the aircraft above the convoy. He said: “Identifying insurgent activity from 10,000 feet can be challenging but in this case it was clearly suspicious. Two people on a motorbike rendezvoused with two others waiting by a small bridge. They collected items stored under the bridge and began digging in the road.”

Alert to the risk that the insurgents were planting a roadside bomb, Flight Lieutenant Williams flew an intimidating ‘show of presence’ over them – flying low and fast and firing flares to startle and deter them and reassure the friendly convoy. He said: “Having been startled by our jet noise the insurgents fled by motorbike. The whole event was over in a minute. The presence of a Tornado provides a huge psychological impact, reassuring ISAF troops and the civilian population, and sparking fear in the insurgents.”

The RAF is considering upgrading their targeting pods to the Litening 4 standard. These pods will be carried by the Eurofighter Typhoon as well. The latest variant of the pod has gone through major enhancements in sensors, resolution, image processing and algorithmic processing capabilities. “Litening has transformed from a targeting pod into a much broader sensor pack that extends the aircraft and pilot’s capabilities, far beyond target acquisition.” Yuval Miller, manager of RAFAEL’s Air and C4ISR Division told Aviation Week. The new version extends the effective observation range, enabling detection and recognition of targets from tens of kilometers away.“

Many automated processes previously employed only in ultra-sophisticated reconnaissance systems are now implemented in the Litening, enabling fighter pilots to assume missions and
capabilities far beyond lasing a target for smart weapons.

In addition to ground attack the pod also assists pilots in identification of aerial targets from Beyond Visual (BV) ranges.