by Dr Dave Sloggett | Terrorists have long exploited the Internet as a means to try and attract recruits to their cause. Recent images have shown the last moments of an alleged British suicide bomber from Crawley in West Sussex preparing for his final mission in Syria where he is about to attack a prison in a vehicle that has been given additional armour plating on its front. Other images have also appeared of Britons who it is alleged have also been killed in fighting in Syria. While precise details are difficult to establish at this moment in time it is thought that at least seven British people have died fighting in Syria on behalf of those opposing the Assad regime.

They are drawn into travelling into Syria by a host of sophisticated messages that are posed through social media. On-line magazines, chat rooms and the use of social media (such as Facebook) to project the images of the dreadful events that are occurring in places such as Syria provide the central grievance that motivates people to travel.

The pictures, often containing graphic content, are transmitted into the bedrooms of vulnerable young men and women across Western Europe have seen the trickle of recruits making the journey to take part in Jihad turn into a stream. While that has yet to turn into a torrent it is generally agreed that upwards of 2,000 young men who previously lived in Western Europe have now made the journey through Turkey into Syria to fight alongside groups affiliated with Al Qaeda.

Through social networks those already involved in Syria are actively projecting a message that it is “cool” to get involved in fighting against the regime in Damascus. It is, to quote one individual positing on his Facebook page, “five-star jihad” and he adds that it is also very relaxing”.

Others have labelled it “Jihad with an iPad, hair gel and Kit Kats”. These messages are clearly designed to convey a sense that anyone becoming involved is not subject to the kind of privations that have previously been associated with the living conditions of jihadists who travelled to Pakistan and Afghanistan.

While detecting specific trends in what is a chaotic environment is difficult one thing that is emerging is that those fighting alongside Al-Qaeda linked groups are also pushing the boundary of ways of using contemporary technologies in novel ways to help them on the battlefield. For example a recent image from the battlefield in Syria shows a rebel fighter using the carpentry application on an iPad to more accurately aim a mortar.

This is not the first time that terrorists have resorted to exploiting current technologies to support their planning and execution of an attack. During the attack on Mumbai in November 2008 the terrorists made extensive use of mobile phones they picked up from those they had killed to look at how the events were being portrayed by the international media.

It became a way of emboldening them to continue the fight over the sixty-two hours it lasted. Those involved knew through social media they were having a dramatic impact on the world stage.

Throughout the attack the terrorists were also kept informed through satellite mobile telephony of any reporting in the media of how the authorities in India were mobilising their security forces to counter the attack.

This gave the terrorists a command and control capability. From a safe house in Pakistan where they had originated reports derived from live broadcasts from major news channels that were giving almost saturation coverage to the events in Mumbai were filtered and key points fed onto the terrorists in Mumbai. This allowed them to remain ahead of some of the somewhat cumbersome response launched by the local and national government in India.

A similar approach was also adopted during the recent Westgate attack in Nairobi in Kenya. This time the terrorists also used Wi-Fi enabled social media (Twitter) for the first time to communicate their intentions with the outside world.

They also used it to broadcast imagery of the carnage that was occurring inside the shopping centre to increase their impact on the international media. Their imagery was highly graphic in its content.

The perpetrators were clearly intent on using Wi-Fi networks to get the full scale of their actions out into the world’s media and onto their audiences. When the authorities tried to take down the networks the terrorists quickly switched to another account. That kind of flexibility and agility takes time and involves some pre-planning to make sure it can occur smoothly. Clearly what happened at Westgate was pre-planned quite carefully by those involved.

Those civilians caught up in the attack also used social media to provide a running commentary of what was happening.

The fact that the terrorists were asking questions of people they cornered in the shopping mall to ascertain if they were Muslims quickly became apparent. Others who were sheltering from the onslaught inside Westgate used their mobile phones to help them memorise key phrases and points of history from Islamic teaching.

Using mobile phone technology and the availability of Wi-Fi networks in the Westgate Shopping Centre the terrorists were also able to monitor media coverage of the attack. This proved helpful on at least one occasion when a Kenyan Minister went on record to say that the mobilisation of their Special Forced would take time.

This enabled the terrorists inside the Westgate Shopping Centre to take time to fortify their own defensive position. Similar public statements by senior people involved in the response to the Mumbai attacks confirm this use of Wi-Fi to enable terrorists to get inside the decision-making cycles operated by the authorities.

This use of mobile technologies to access media reporting and also receive updates from remotely based commanders is just another application of contemporary technologies that terrorists have made.

Their use of social media to help plan attacks has also been well known for some time. Secure email applications, with high levels of encryption, are technologies that groups such as Al Qaeda are all too familiar. But do they have other avenues they can explore?

In the immediate aftermath of the attack in London on 7 July 2005 the Metropolitan Police ordered the suspension of mobile phone coverage over the capital in an attempt to prevent bombs potentially being detonated remotely.

As it was the suicide bombers involved in that attack simply applied wires to a battery to physically detonate the devices. The remote detonation of Improvised Explosive Devices (IED) using mobile phone technologies is a well-known tactic that has been used by terrorists overseas. As a tactic it remains a major concern for the authorities in the west. But if terrorists cannot use mobile phones to trigger an explosion what about using Wi-Fi?

Travel anywhere these days in a major city and the increasing availability and coverage of Wi-Fi networks is self-evident. For terrorists seeking to exploit such networks it would be important for them to conduct a reconnaissance of the target to ensure the coverage of the network was reliable.

For the terrorists it would be more than unfortunate for them to have gone through all the planning just to find the reception of the Wi-Fi signals at a specific location was insufficient to allow them to remotely detonate a device.

For the Police this extra means of potentially remotely detonating a device is another cause for concern. However closing down the multitude of Wi-Fi networks that could be available in a major metropolis is likely to be far more difficult that simply issuing an order for the mobile phones networks to be temporarily suspended.

Of course there is another side to the argument. Having those caught up in the attack able to act as citizen journalists and send their own images through of what is happening does have its advantages to those trying to respond.

This would be particularly helpful in the case of a marauding–firearms attack. Having instant access to images broadcast by those caught up in the attack would help the situational awareness of firearms teams trying to formulate a rapid response. Such attacks are often dynamic, as Mumbai showed, with gunmen moving onto new targets quickly, trying to stay ahead of the authorities trying to halt the situation. Deploying medical and fire teams into such an environment involves risks and anything that could minimise the dangers would be welcome.

This all leads to a simple conclusion. Despite the risk the case for disabling the mobile phone or Wi-Fi networks in the event of a terrorist attack, like many things in life, is not clear. For those training and preparing to respond to the next major terrorist attack, wherever it may occur, it is just another factor they have to build into their planning and exercises.

Dr Dave Sloggett is a provider of training to the Emergency Services fraternity and the MoD on the nature and direction of international terrorism. Dr Sloggett has over 40 years of experience in the international security sector. He is a speaker, author and researcher working in the field of counter terrorism. Historically Dr Sloggett led the teams implementing the ANPR systems and pioneering work in the e-Borders field. He delivers a range of lectures for all branches of the Emergency Services providing insights into the current trends and future direction of domestic and international terrorism. He is also a specialist in the CBRN field having written numerous papers on the threat from WMD for a range of publications to which he contributes. He also provides advice to the MoD and is a frequent visitor to theatres of conflict. 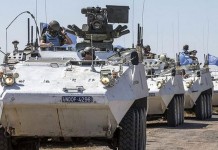 Syrian Jihadists turn against peacekeepers on the Golan 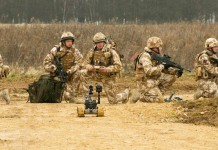