The military has employed motorcycles for special purposes since they were invented, for their independent operation, transportability and tactical advantages. The concern about these machines was never about their performance or manoeuvrability but about safety, as the accident rate of motorcycles was always higher than four wheeled motorcars.

The special operations community has recognized these combat advantages, realizing that go-anywhere dirt bikes can move where no ATV can go. But these motorbikes are still too noisy for covert operations.

In fact, the U.S. Special Operations Command (SOCOM) wanted a stealthy motorcycle, one that could jump out of helicopters or MV-22s tilt-rotor plane, move fast and quiet, enabling assault teams to gain the element of surprise. They wanted a rugged machine that could be operated reliably in harsh field conditions, start instantly even at extreme temperatures.

“Although there are diesel motorbikes in service, they didn’t meet all the requirements and SOCOM decided to shop for a more advanced solution.” John Lloyd, Zero Motorcycles President and CEO told Defense-Update. They selected Zero Motorcycles to come up with an electrically powered motorcycle, tailored for their specifications” Lloyd added, “Electrically powered motorcycles like our Zero family offer unique advantages for the military user – with no gears and liquids, they have low wear, and are practically maintenance free, thus they are very reliable.” Lloyd explains. The simplicity is also reflected in low cost, he said.

“Todays’ electrical motorbike stands out to perform at least equally to any petrol bike, adding stealth and improved field reliability” Lloyd claims, adding that the militarized variant of the family, Zero MMX was specially designed to address the special operations missions. Zero has already delivered the first MMXs to the US military as Well as to foreign countries.

“The special operations community has recognized these combat advantages, realizing that go-anywhere motorbikes can move where no ATV can go”

Lloyd argues that hybrid propulsion would complicate the system, and increase maintenance workload. The military is also pursuing this technology, combining electrical and internal combustion engine, in parallel to the all electric bike. “We decided not to participate in the DARPA hybrid motorcycle program, as we are fully committed to full-electric propulsion for the advantages it has. By adding an internal combustion engine and associated mechanisms you complicate the system. Our all-electric technology can compete with that.” 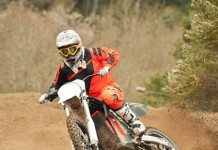 These stealthy bikes are made for special ops