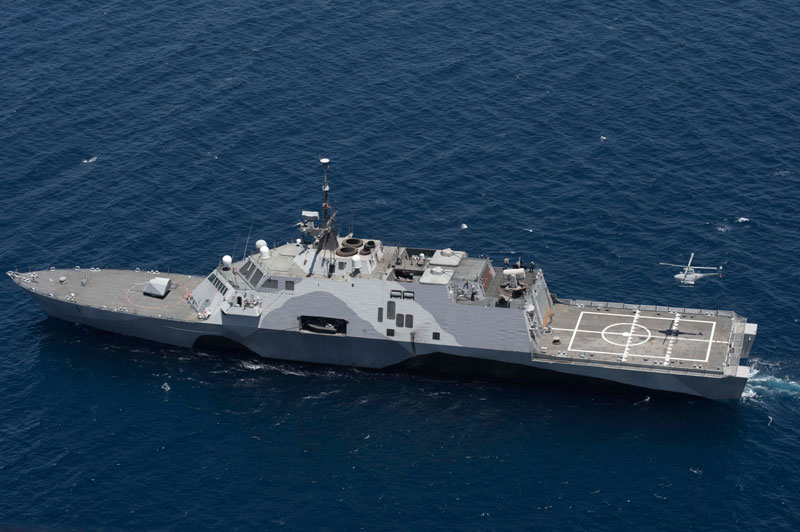 During recent tests of USS Freedom, the firs vessel of the US Navy’s Littoral Combat Ships (LCS) the Navy successfully flew the unmanned MQ-8B Fire Scout simultaneously with the MH-60R Sea Hawk helicopter for the first time. The capability demonstrated how a mix of aircraft can increase a ship commander’s intelligence-gathering capabilities aboard the Littoral Combat Ship. The Freedom LCS can operate an MH-60R and a firescout unmanned helicopter, or several firescouts, stored at a covered hangar adjacent to the rear landing deck. The Independence Class LCS has a larger deck and hangar, enabling it to carry two MH-60R and at least one firescout.

The flight tests took place May 12, aboard the USS Freedom (LCS 1) off the coast of San Diego. The Fire Scout complements the Sea Hawk because it can fly for longer periods of time, thus maintain constant surveillance on a target or area of interest. The MQ-8B Fire Scout was on its eighth at-sea deployment supporting a variety of surveillance and security missions onboard Navy frigates. The system also completed a two-year mission providing ground commanders intelligence-gathering capabilities in Afghanistan.

“Utilizing the Fire Scout in operational maritime scenarios with manned aircraft will prove to be a unique asset to our fleet,” said Capt. Patrick Smith, Fire Scout program manager. “The sensors of the Fire Scout are providing complimentary situational awareness and precision targeting support for the MH-60R Sea Hawk and Littoral Combat Ships.”

The MQ-8B Fire Scout developed and built by Northrop Grumman is designed to take off autonomously and land from any aviation-capable warship. It has the endurance to fly for five hours and has logged more than 12,500 flight hours from land and sea. 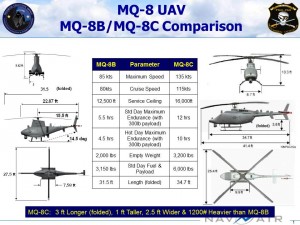 The MQ-8B has been operating from air-capable ships with initial deployment on a Guided Missile Frigate (FFG), followed by final integration and test aboard the Littoral Combat Ship (LCS). The larger MQ-8C air vehicle upgrade will provide longer endurance, range and greater payload capability than the MQ-8B (see comparison table). It will conduct initial testing on guided-missile destroyers (DDG)-class ship. 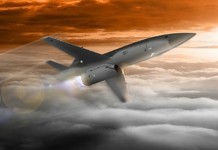