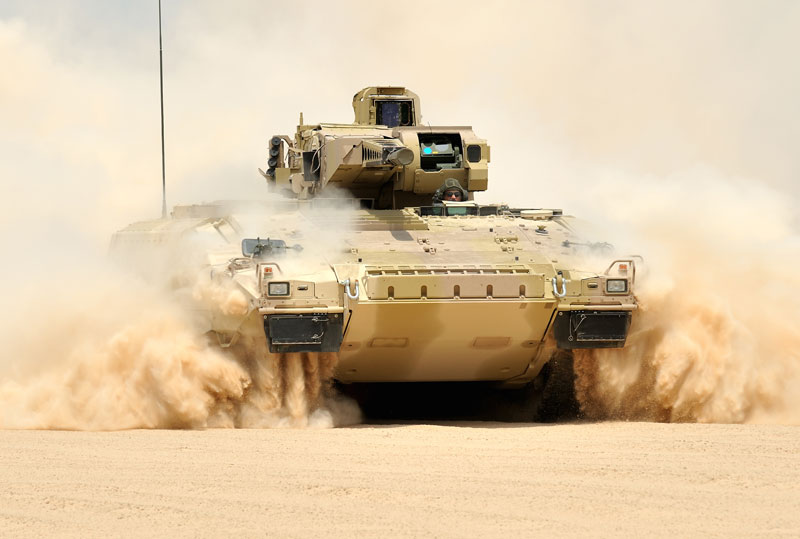 The German PSM group, the manufacturer of the Puma armoured infantry fighting vehicle is displaying this armored vehicle at the Eurosatory exhibition following a successful series of tests demonstrating the vehicle’s performance under extreme climatic conditions. Last year the Puma has undergone hot, dry testing in the UAE 2013), which followed the cold weather testing in Norway in 2012.

On the desert trials testers from the German Defence Technology Detachment (WTD) 91 evaluated the firing accuracy of the Puma’s main and secondary armament was tested. Both MK30-2/ABM automatic cannon and the MG4 machine gun were put to the test. Live firing was conducted in stationary mode as well as on the move, both day and night. Temperatures at the modern firing range in the northwest UAE ranged between 35 and 50° C in the shade. In addition to the firing test the air-conditioning system were also evaluated. Operating at high temperatures for weeks on end, the trials provided an effective test series for extensive, daily operation of the system. The participants also gave high marks to the IFV’s Multifunctional Self-Protection System (MUSS).

The Puma IFV demonstrated its mobility at two other proving grounds in the north and northeast of the UAE. Experts from WTD 41 were in charge of the mobility trials. Displaying excellent staying power with no breakdowns, the Puma proved that it could handle a great variety of different terrain types, including sand dunes, steep loose-surface tracks and a rocky desert streambed. Successful completion of the summer trials represents another important milestone on the path to getting the Puma to the troops later this year.

Among the vehicle’s unique attributes are its effective modular protection concept, a remote-control, stabilized turret armed with an ABM capable 30mm automatic cannon, and decoupled running gear with hydro-pneumatic shock absorber elements. The vehicle is powered by the newly developed MTU diesel engine developing 800 kW of power. The vehicle delivered to the Bundeswehr are fitted as ‘network-enabled warfare capabable’, provided with battle management systems and supporting ‘future soldier systems’ and digital communications equipment. In addition to their combat capabilities, the vehicles can also be operated in ‘training mode’, providing an autonomous training platform, functioning as a realistic combat simulator for crew and unit training. Multiple vehicles can also be networked, makes it
possible to connect up to four vehicles in a training formation.

PSM Projekt System & Management GmbH is a 50:50 partnership established by the two German leaders in combat vehicles – Krauss-Maffei Wegmann and Rheinmetall. The group was founded specifically to manage the German Puma procurement project on the contractor side.