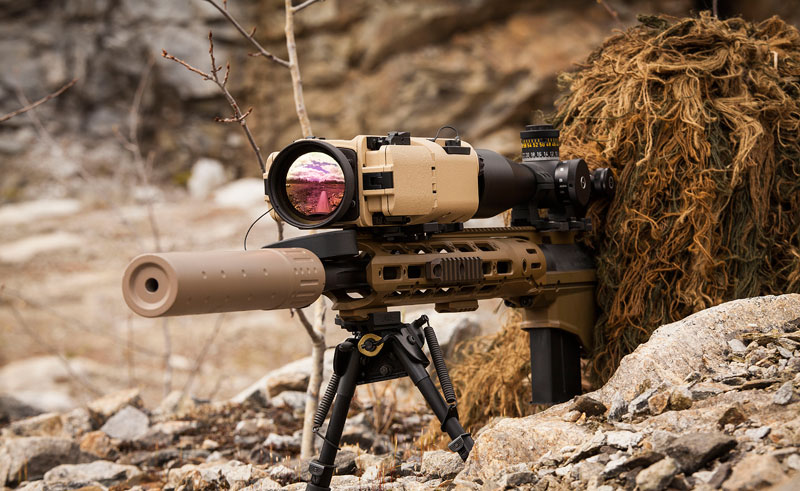 The HISS-XLR mid-wave thermal weapon sight is one of the FLIR’s new tactical sight range. This clip-on thermal weapon sight allows snipers to detect and recognize man- size targets in excess of 2,000 meters, a significant increase in engagement range of more than 25% compared to previous models.

It uses a miniature cooled 640×480 InSb FLIR, couples with 240mm long range optics packed into a compact assembly fully tested on weapons up to and including .50 caliber. Using an MWIR sensor enables the shooter to see the target in total darkness, through smoke, fog and most battlefield obscurants. The sight has a fixed f2.29° h x 1.72° v field of view.

The sight features a built-in ballistics mode that can give an instantaneous target solution when integrated with laser rangefinder and ballistics computer. The HISS-XLR also includes an integrated digital magnetic compass for azimuth information. The high definition display provides cleaner text and symbology while allowing the use of day scopes of up to 25× without image distortion. The sight view can be record on an integral SD card for post-mission debriefing. For real-time monitoring video output can be fed to a monitor or to a remote users via radio.

The sight can be remotely operated from a stock-mountable control pendant. The sight consumes 6 watts of power, delivered by two battery packs which support more than four hours on operation. These packs are ‘hot swapped’, meaning that the unit can operate on a single pack, while the other pack is replaced with fresh batteries.
Another system recently unveiled by FLIR is the Recon V, a compact, rugged, ultra light weight multi-sensor thermal binocular. The primary sensor is a cooled FLIR system integrates a high resolution InSB 640×480 mid-wave IR (MWIR) sensor. The image delivered by the detector is further sharpened by the STACE technology that digitally sharpens, tunes and enhances contrast to maximise the image details definition. The optical assembly uses a x10 zoom, that can move from 2 ̊ to 20 ̊ in less than 2 seconds. The system also integrates an eye safe laser rangefinder operating in the 1.54 μm range. It can also accommodate an additional laser pointer, operating at the 852 nm band, for target marking.

To deliver a sharp and stable image with the hand held device the Recon V uses electronic image stabilization, that result in no image latency.

An integral 3-axis MEMS gyro, GPS navigation and digital magnetic compass, the system can determine location and heading with high accuracy. The systems’ laser rangefinder can operate at ranges up to 10,000 meters, provide accurate range to target, while target geo location is determined by the system’s computer.

The system uses a high definition (HD) color video display, the simple user interface does away with multiple buttons and complicated multi-layer menus, making the Recon V easier to use. As with the HISS-XLR, images can be recorded on an SD card, storing at least 1,000 images at high definition. The system can operate continuously for six hours on four Lithium AA batteries.