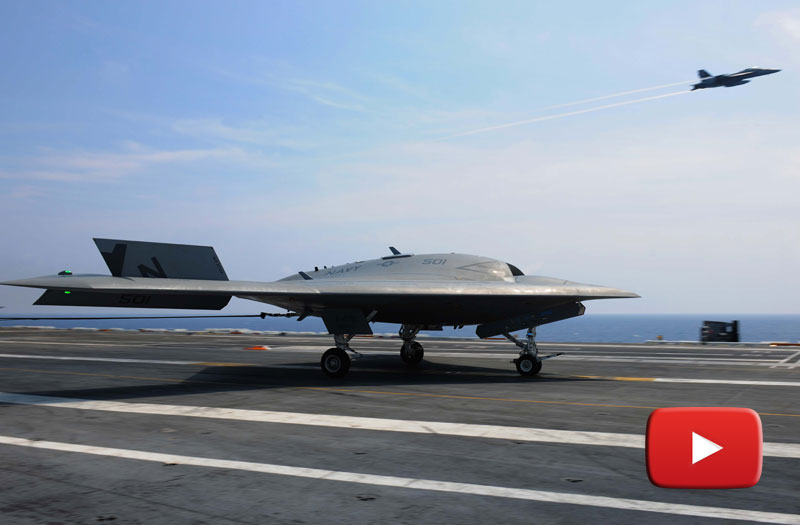 Testing of the X-47B completed an important test series this week aboard USS Theodore Roosevelt (CVN 71). On Aug. 17, 2014 the drone demonstrated that it can operate safely and seamlessly with manned aircraft. The flights – the first time manned and unmanned carrier aircraft have operated together in the same carrier controlled landing pattern at the same time – took place in the Eastern Atlantic. They offered Northrop Grumman and the Navy an opportunity to collect data that will help reduce risks associated with integrating unmanned aircraft with conventional manned carrier operations.

Building on lessons learned from its first test period aboard the Roosevelt in November 2013, the X-47B team is now focused on perfecting deck operations and performing maneuvers with manned aircraft in the flight pattern.

Today we showed that the X-47B could take off, land and fly in the carrier pattern with manned aircraft while maintaining normal flight deck operations. This is key for the future Carrier Air Wing.

Demonstrating key parts of flight integration of an unmanned system into the carrier air wing, an X-47B followed an F/A-18 Hornet taking off from the carrier deck. Soon after as the two were coming to land, the Hornet flew 90 seconds behind the X-47B in all but standard carrier recovery pattern. The 90 second lapse would enable the X-47B to land, raise its hook, fold its wings and be taxied out of the landing area to clear the deck for the F/A-18 to follow, just like any other manned aircraft does.